Energy drinks are a $12.5 billion dollar industry in the United States, and while the sale of soda continues to decrease, energy drink sales grew by 6.7 percent in 2013. Consumption is increasing among middle school and high school students, especially boys.

The increase is driven by powerful marketing machines that target advertising to teens and young adults in ways that didn’t exist 10 years ago — game systems, downloaded apps on personal phones, reading devices and social media. They also target traditional methods, such as TV, magazines and sports sponsorship, especially motor sports and extreme sports.

Most kids know energy drinks aren’t healthy. They know the drinks are full of empty calories and loaded with caffeine; a central nervous system stimulant. Yet, they drink them because as one freshman explained, “People think drinking them is cool, especially boys.”

Caffeine has stronger effects on young people than adults. It can cause rapid heart rate, transient hypertension, and headache. Young adults are mixing these drinks with alcohol or drugs and driving, and it has becoming a significant health problem.

To address this potential new “gateway drug,” parents need to talk with their children early on — well before middle school.

Share your opinion on energy drinks and health habits on a regular basis, when you still have your children’s attention and are influential. Teach them to respect their body. The best way to embed these values is to model them in your home and in the choices you make. Sprinkle in a few short but poignant news stories to demonstrate your point.

As they get older, talk to them about marketing and how it influences trends, especially in their age group. Make a game out of identifying the silliest or most clever advertising — use the old cigarette ads from the 70s as an example. Then look at the ads for drinks today, but beware — many have sexual amd violent themes. This would make for a very interesting high school project.

Talking about energy drinks is just the beginning. Tickle your children with little bits of information when they can’t escape, like in the car, on the bus, or better yet, while walking in the park. Listen carefully because they will share less and less as they get older, but often what is shared is important.

And what if you missed that influential window of opportunity? Be blunt. Be a parent. Set limits. 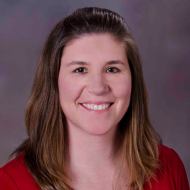 April Mitsch, M.S., R.D.N., IBCLC, is a Feeding Clinic Dietitian at the Child Development and Rehabilitation Center (CDRC) and an Assistant Professor of Pediatrics at Oregon Health & Science University. April works to help families of medically fragile infants reach the most natural and safe feeding method by supporting responsive parenting and infant driven feeding. Got a question for her? Leave a comment below!

3 responses to “Talk to your kids about energy drinks”