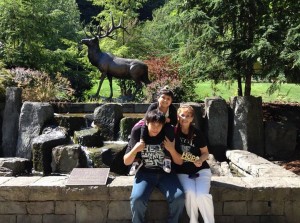 Eleven-year-old Alexa, known to her friends and family as “Princess Lexy,” wants to kick cancer’s booty.

When Alexa’s mom, Monica, heard about Phil Knight’s $1 billion challenge to OHSU last September, she showed her daughter and her 15-year-old son, Cameron.

“The kids thought this might be the breakthrough we need. A billion dollars could cure Alexa and her many, many friends also suffering with cancer – she always thinks of the other children with cancer,” Monica said.

So Alexa and Cameron’s fundraising challenge was born – they issued a challenge to their friends, family members and fans of Alexa’s Facebook page to donate a dollar or more to help “Kick Cancer’s Booty” (view their fundraising site here). 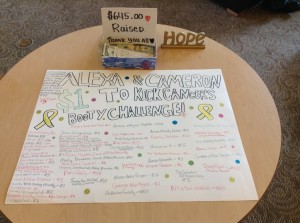 “People started sending money like crazy,” Monica said. “It came in envelopes with stickers, cards and dedications. One 10-member family sent 10 $1 bills – one for each family member. Alexa and Cameron were very proud.”

To date, they have donated $645 to the Knight Cancer Challenge.

Alexa and her family are working hard to raise awareness about the challenge and its importance for fighting pediatric cancer. Last month, Alexa and her family met with Portland Mayor Charlie Hales, who officially proclaimed September – and every following September until a cure is found – Children’s Cancer Awareness Month in Portland. 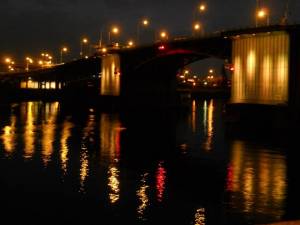 On September 24 and 25, Portland’s Morrison Bridge was illuminated gold in honor of children with cancer, which Alexa’s family initiated. They gathered at the Tom McCall Waterfront Park to view the lights together (see photos from the event here).

Find out more about the Knight Cancer Challenge and how you can help OHSU meet Phil Knight’s challenge here.