“Once upon a time in the Kingdom of Big, a little girl arrived early – so early she surprised even her mom and dad. Being so tiny was fraught with danger, what with all that breathing to do! Worry ruled the kingdom. Luckily, genius giants were at hand (though everyone was giant to her). Using their jumbo-sized brains, hearts and doohickeys, they eased our pint-sized hero up to fighting weight, which was the perfect weight for a fighter like her.”

In case you hadn’t guessed, the “Kingdom of Big” in the story above is Doernbecher Children’s Hospital. The “pint-sized hero” is a little girl named Mae Lin (she’s now 7 years old), who spent the first few months of her life in the Doernbecher Neonatal Care Center (DNCC). Mae Lin narrated her story for a radio spot that’s being aired on local stations.

We turned to Mae Lin’s mom, Dr. Dawn Nolt, for another important perspective in Mae Lin’s Doernbecher story. Dawn is a pediatric infectious diseases specialist at Doernbecher, and her work takes her all over our hospital, including the DNCC. Below, Dawn explains how her medical background and her Doernbecher connection impacted her experience as Mae Lin’s mom.

You learned some unexpected news at an ultrasound appointment. Can you tell us about that?

The ultrasound showed that my daughter was much smaller in size than what is expected at that point in a pregnancy. My physicians immediately placed me in the hospital and delivered my little girl, Mae Lin, two days later.  She was born at 28 weeks in the pregnancy (a pregnancy usually lasts 37-40 weeks). 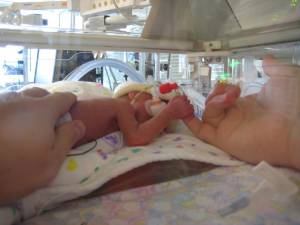 What was it like being both a mother and a doctor in the hospital where your daughter was treated?

I didn’t work with any DNCC patients while Mae Lin was hospitalized, which temporarily removed my role in the DNCC as a physician. Instead, I visited the DNCC as “Mom,” reassuring doctors and nurses that they should talk to me as a parent, not as a physician.

Like any new mother, I was worried about how Mae Lin was doing. However, I had worked with the DNCC doctors before when caring for other patients, so I knew they would do as wonderful a job with my daughter as they had with other patients. 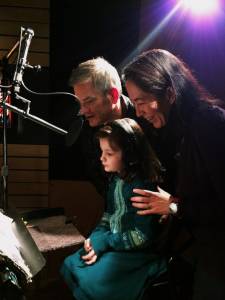 What’s Mae Lin up to these days?

She’s your average first grader: eager to go to school and very proud of her hard work when she accomplishes her tasks. Mae Lin is friendly, and she’s pretty quiet until she’s comfortable with her surroundings. She thoroughly enjoys her extra-curricular activities and has weekly lessons for swimming, acting and martial arts (hence the “fighter” references in her radio spot). She loves geocaching and fishing and she’s always able to give her opinion when asked.

This year in school, Mae Lin’s class learned about stories and how they’re structured, so she’s had the opportunity to share her story with her classmates.

Listen to the full radio spot below:

For more amazing patient stories like Mae Lin’s (and artwork, too) go to amazingstorybook.com.

Every year, more than 5,000 babies in Oregon and Southwest Washington are born too soon. OHSU Doernbecher has joined thousands of teams across the country that support the March of Dimes‘ March for Babies. Interested in participating? Join Team OHSU/Doernbecher Tiny Feet!