When he grows up, Doernbecher Freestyle patient-designer John Charles wants to be a pro athlete. (His favorite athlete? Damian Lillard, of course). He enjoys being outside, hiking and spending time with his dog, Teagan. Though you wouldn’t guess it by looking at him, John was diagnosed with Crohn’s Disease last year.

Below, John’s parents, Tony and Mary Charles, explain how John’s journey has impacted their family.

When your 9-year-old child becomes progressively ill, is not eating and is losing weight, feels constantly tired and listless, is sent urgently to the hospital by your pediatrician and is subsequently diagnosed with a lifelong, chronic, and incurable illness that has significant potential complications long term, life kind of feels like it just served you a glass of pure, undiluted lemon juice concentrate – both for your child and for you as a parent.

Our son John was diagnosed at OHSU Doernbecher Children’s Hospital in 2014 with Crohn’s Disease, an auto-immune, gastrointestinal disorder characterized by symptoms too uncomfortable to describe in a blog unrelated to the specific condition. After four days in the hospital, a colonoscopy and an upper endoscopy (where the doctor passes a tube with a camera through the mouth, esophagus, stomach and into the small intestine), high doses of numerous drugs, including tremendously effective but highly toxic corticosteroids, our son finally started to feel better after months of having felt progressively worse. 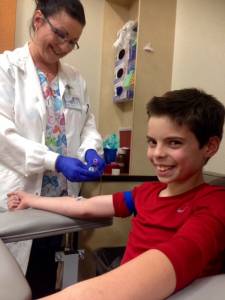 John’s pediatric gastroenterologist at the hospital, Dr. Linda Muir, and the entire nursing staff at Doernbecher were simply amazing. Not only did they make John feel like he mattered, they demonstrated to all of us (John’s parents and his four siblings), that they cared. And they cared not just about John’s physical condition, but about John’s and our collective emotional state. They wanted to provide us with the information we needed to understand what was happening, to provide us the medical options in front of us and to ensure we had the support structure to cope with such a life-changing diagnosis. They recognized and helped us to recognize that the diagnosis had potential to impact not just John, but our whole family.

Dr. Muir has been so tremendously positive in her care for John. Through her encouragement, John has become faithful in taking his medicines (all 11 pills each day). Since his diagnosis, John has had one flare, which Dr. Muir got under control using steroids as a rescue medication. She explained that this was not uncommon and this helped John to understand

the importance of adhering to his medication schedule.

Dr. Muir has been so invested in our son’s life and his well-being that she even nominated John for the Nike Doernbecher Freestyle program. After being selected this past spring for the fundraising program, John has been exposed to a remarkable experience, one that he hopes will help him to use his disease to build awareness of Crohn’s and to help other patients better cope with their diagnosis. The caring concern and attention we have received from Doernbecher, Dr. Muir and the staff have added large amounts of water and sugar to life’s offering, thereby significantly sweetening what otherwise could have been a bitter and sour experience.

Interested in learning more about Crohn’s Disease and connecting with others? The Crohn’s and Colitis Foundation of America (CCFA) is a great place to start.

Meet John and the rest of this year’s incredible Doernbecher Freestyle patient-designers here – and save the date for the big collection reveal at our auction on October 23!

One response to “Our lemonade experience: the Charles family’s story”