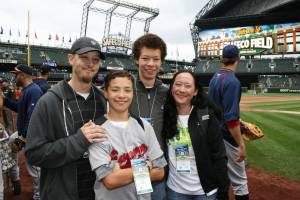 Below, Janice Burris shares her son’s Doernbecher story. Thirteen-year-old Jacob is one of our 2015 Doernbecher Freestyle patient-designers, and he’ll be following up next week with a post of his own!

Jacob was born a healthy baby boy thirteen years ago. He has grown up to be a great student, a dedicated athlete, and an all-around great person. Last May during a routine well-child/immunization visit to the pediatrician, we learned that Jacob had high blood pressure and a heart murmur that had never before been detected.

After follow-up tests were performed up at OHSU Doernbecher Children’s Hospital, Jacob was diagnosed with a heart condition known as a coarctation of the aorta. The aorta is the largest vessel attached to the heart. Jacob’s aorta had a pinch in it, much like a kink in a hose. The kink was causing very high blood pressure above the kink in his upper body, and simultaneously causing very low blood pressure below the kink, leaving his lower extremities in a state that is comparable to dehydration. In fact, the only way Jacob was getting any blood flow beyond his kink was by developing a bunch of small compensatory vessels beginning above the kink and ending below it. This was his body’s way of adapting to his specific situation in order to get blood flow to the lower portion of his body, and at that point it had been doing so for 12 years. 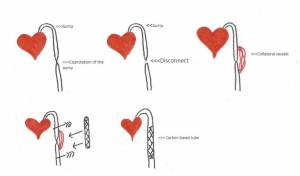 Last July, the cardiology intervention team at OHSU attempted to open up this kink by adding a stint. At this time, the intervention team discovered that what had been previously considered to be a kink was virtually disconnected, and repairing it would require heart surgery.

On September 5, 2014, Jacob underwent heart surgery. The incredible pediatric cardiac surgical team at OHSU successfully grafted a carbon-based tube in place of the disconnected portion of his aorta. The surgery itself took about seven hours and his recovery went well.

Jacob has since had two subsequent hospitalizations. Both were to remove fluid from his paracardium, which is the lining around the heart. During his time at Doernbecher Children’s Hospital, Jacob was nominated to be a Doernbecher Freestyle patient-designer by a member of our surgical team, Pediatric Cardiologist Dr. Rich Reed.

He’s doing great now and has since gotten all caught up in school with his peers and just finished up playing spring and summer baseball. Had Jacob’s condition continued to go on undiscovered/ untreated, he could have been lost.

Jacob really wants to help others who may be in danger of having a heart condition by reminding everyone to check their blood pressure regularly. A change in blood pressure is often the first indication something may be wrong with your heart. Detecting high blood pressure saved Jacob’s life and it could save the life of someone you love as well.

Here at home in Eugene, Jacob is an advocate for heart health awareness. All around town, Jacob passes out small pins that remind people to check their blood pressure. He’s also advocating for research to improve current newborn screening for CHD’s because his coarctation went undetected for so long. Jacob is honored to be a part of the 2015 Doernbecher Freestyle patient-designer team!

Learn more about Jacob and how he’s helping spread the word about heart health on his website or follow along on his “Jacob’s Heart Story” Facebook page!

Meet Jacob and the rest of this year’s incredible Doernbecher Freestyle patient-designers here – and save the date for the big collection reveal at our auction on October 23!