No one knows sneakers quite like Jordan Geller does. He holds the Guinness World Record for the largest collection of sneakers owned and is passionate about sharing his collection with others in the sneaker community by way of his “Shoezeum” and by sharing photos and videos on his social channels. Below, Jordan shares his quest to collect 13 highly sought-after Doernbecher Freestyle shoes and makes an exciting announcement about his next project, an auction that will help us help kids!

After a series of fortunate events, I ended up with the size 11 pair, which cost $11,100.00. I felt like the whole thing was meant to be and that I needed to do something with this opportunity.

When the shoes arrived a few weeks later, I was elated. I could hardly contain myself as I filmed the unboxing video. I even knocked the camera during filming because I was so excited (watch the video, below)!

As I was unboxing the shoes, an idea started to form. That was when my quest began. I decided to find and purchase each of the 13 models whose design elements were used in the What the Doernbechers, filming and sharing a YouTube video review on each pair and their patient-designer’s story along the way. 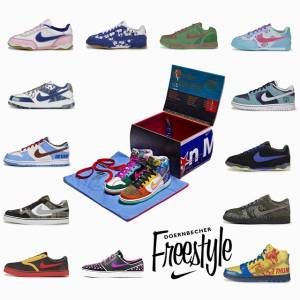 You can view all 12 videos I’ve made on my YouTube channel. These are links to the twelve videos that I have done. The thirteenth pair (designed by patient-designer Alice Heinz in 2007) is on its way!

In addition to collecting all of these shoes and making videos to raise awareness for Doernbecher Children’s Hospital, I decided to go through my closet and storage unit and pull out a bunch of my shoes to auction off on eBay and donate the money to Doernbecher.

Here’s a link to my eBay store: ebay.com/ShoeZeum. Happy bidding!

The auctions will go live on September 1 and 2 and will run for 10 days each. Thank you, Doernbecher, for the opportunity. This is so much fun!

Save the date for the Doernbecher Freestyle 2015 collection reveal and auction on October 23 at the Portland Art Museum!