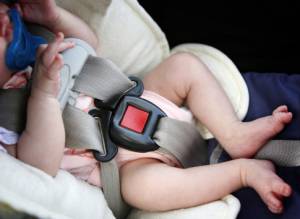 After finishing up clinic on a Monday evening at about 5:30, I headed over to the pharmacy to pick up a prescription. As I passed through the drop-off circle on the way to the Physician’s Pavilion, I noted a new family wrestling with their car safety seat – the father pulling straps while the mother sat in the back with their newborn. I could see the frustration on both of their faces, exhausted from the ordeal of birth and the hectic post-partum period. I thought about stopping to help, but I needed to get home to cook dinner for my family, so I walked on.

Twenty minutes later, I left the pharmacy to walk back to my car. As I approached the circle, I saw the new family was still there, still wrestling with their car safety seat, and clearly at the end of their rope. I stopped.

I introduced myself as a pediatrician and certified child passenger safety technician and offered to help. I spent the next 25 minutes teaching them to correctly use their car safety seat. We removed an insert in the seat that pushed the baby’s head too far forward, and lowered the harness straps to properly fit the baby in the seat. We tightened the harness straps to ensure a correctly snug fit. We adjusted the angle of the seat’s recline so the baby’s head would not flop forward, occluding his airway. We pushed the car seat into the cushion of the vehicle seat and tightened the lower anchor to ensure an appropriately tight installation. We rolled up receiving blankets to correctly position the infant’s head in the seat.

When we were finished, everything was perfect – and the parents could replicate everything we had done together. They shook my hand and graciously thanked me. My family ended up eating dinner pretty late that night, but that family left our hospital with their son protected as safely as possible.

During the 40-plus hours of that infant’s stay at OHSU, he had his vital signs (including his temperature) taken at least every eight hours. As a general pediatrician for more than 20 years, I cannot remember a single case where the temperature of a well newborn, with no risk factors for infection or other previously identified concerns, was abnormal. I know it happens, but I have never experienced it. Some of the reasoning behind taking an infant’s temperature at least once every nursing shift has to do with hospital policies and protocols, but nurses and medical assistants have told me it’s to ensure that the babies are “safe.”

Every single infant who is traveling home in a private vehicle is required by law to ride in an approved car safety seat. The newborn care team routinely asks families if they have a car safety seat. If families don’t have one, they’re instructed to get one, as a requirement for discharge. The pediatric team hands each family a sheet of paper with some basics of newborn care and safety, including the guidance to use their car safety seat facing the rear of the vehicle until the child is at least 2 years old. This is the generally the extent of the guidance and assistance that families get regarding safe travel.

According to data from the U.S. Centers for Disease Control and Prevention, 134 infants younger than 1 year of age died in motor vehicle crashes in the U.S. in 2013. Approximately 500 more infants were hospitalized and more than 8,000 were treated in emergency departments for serious injuries sustained in crashes. Twenty-three percent of the babies who died were unrestrained at the time of their death; 77 percent were in a car safety seat. Between ages 1 and 15, motor vehicle crashes remain by far the leading cause of death for children.

Anyone who’s ever installed a car safety seat will tell you it’s generally neither fun nor easy. Data from the National Highway Traffic Safety Administration has shown that approximately 3 out of 4 car safety seats are used incorrectly, with misuse errors that are likely to significantly increase the risk of injury to the child passengers.

My own experience as a CPS (child passenger safety) technician who has worked with more than 8,000 families since 1997 tells me that those misuse statistics are likely an underestimation of the problem. In 2014, with help from colleagues at the OHSU Doernbecher Tom Sargent Safety Center, we studied how families with well newborns at OHSU used their car safety seats. What we found was truly disturbing: Out of 292 families with well newborns, 93 percent made serious errors in how the infants were harnessed in their seat, and in how the seat was installed in their vehicle. The average family committed more than five serious mistakes.

How many families suffer the experience I encountered on that Monday evening? What might have occurred had I not stopped? At best, the child would have gone home at an increased risk for injury in the event of a crash. At worst, the exasperated parents may have given up and carried the infant in their arms. While this may seem difficult to believe, a full 10 percent of the infants injured or killed in crashes in 2013 were completely unrestrained – it happens.

The Tom Sargent Safety Center at OHSU Doernbecher currently employs a dedicated staff of certified CPS technicians. We can provide inpatient consultation for children who have suffered injuries, who have special transportation needs or who are in need of a car safety seat, collaborating as part of the care team to ensure a safe transition home.

We staff a community car seat fitting station at OHSU Doernbecher, generously funded by Kohl’s Cares, by appointment only, and work with more than 2,000 families in the Portland area each year. The demand for this service is so great that we routinely have a 3-week wait list. The Safety Center provides guidance and education to thousands of families each year and sells discounted home safety equipment (including bike helmets, stair gates, window guards, smoke detectors and cabinet locks) to many thousands more.

Here’s the thing: As hard as we work at the Safety Center and as much as we do, we simply do not have staff or resources to provide assistance to families with newborns. We know that each and every day, approximately 6-7 newborn babies will leave OHSU, and that almost all of them will be unsafe. We know that families will struggle, and that infants are being endangered, and we cannot unknow that. We also know that we need to change this.

A world-class health system should ask first and foremost “What is best for patients?”, and endeavor to do just that. So while you are reading this, you can be certain that every single infant born at OHSU today will have their temperatures carefully measured each nursing shift for the remote possibility of detecting an unsuspected fever. Perhaps an abnormal reading will lead to an intervention that will protect the baby.

I have a problem with that, and it’s time for us to change it. I have no problem with eating dinner late; I will be late forever if it means doing what’s best for kids. Is it best for kids to ignore their needs, to pretend we do not know what we know about how to best protect them? We owe it to our patients – to our community – to provide the best possible care. That is, indeed, what a world-class health system should do. Should that not include ensuring that each and every infant can get home safely?

4 responses to “Getting home safely”