Nothing compares to the excitement of being a new parent. The bond between a mother and her baby starts to form soon after birth, and it happens in many ways. Mothers have to assist their newborns in basic functions, including sleeping and eating. So when breastfeeding does not go as smoothly as had been expected, it can cause significant frustration in new parents. 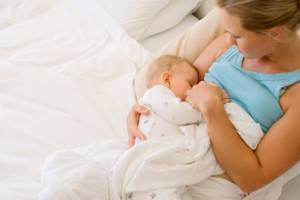 When discussing this issue, something that frequently comes up is whether or not a child could have a shortened tongue frenulum, also known as a “tongue tie.”

What is tongue tie?
We all have a frenulum underneath our tongue. As we develop in the uterus, our tongue starts out fused to the floor of our mouth. As we grow, the tongue is freed, except in the midline, where a small band of tissue remains – we call this the frenulum. The size of this band and the degree to which it restricts tongue movement can vary widely.  Studies show that up to 10 percent of the population can have this condition; however, it doesn’t always cause symptoms.

What problems can it cause?
Tongue tie has been associated with breastfeeding problems, including sore nipples, poor latch and poor weight gain. A quick procedure called a frenulotomy can be performed, and at least in some cases, can be helpful to improve breastfeeding. The procedure is not without risks, although they are fairly rare; these can include bleeding, infection, injury to surrounding saliva glands and recurrence of the tie due to scarring. It also doesn’t always work to fix all issues with breastfeeding.

Because this issue has not been researched as thoroughly as we would like, the degree to which your baby may improve with the procedure can be hard to determine.  Your Otolaryngologist will work with you to weigh the risks and benefits for your particular situation in deciding whether or not to proceed.

When does tongue tie need to be treated?
The procedure is reasonable to consider when there is significant pain with nursing that doesn’t improve with time, experience and improved latching technique. Additionally, poor weight gain in a child with a tight frenulum may prompt consideration of the procedure. A consultation with a lactation consultant can be invaluable in sorting out these issues.

Tongue tie can also be associated with speech problems.  These do not usually surface until later in childhood, often between 4-6 years of age, and affect only a minority of patients that are born with a tongue tie. For this reason, clipping the tongue in a baby solely to prevent future speech problems is not generally recommended.