This article was written by Megan Haverman and originally appeared in the Portland Monthly 2016 Kids’ Health Annual magazine. 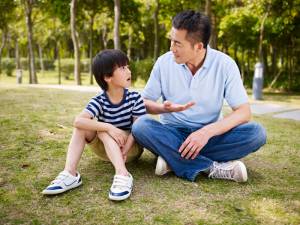 It’s inevitable. Maybe a curious 4-year-old inquires after the state of an obviously pregnant woman in the grocery aisle. Maybe a kid happens upon a racy scene on TV, or hears something from friends that requires explanation. This is the moment at which many parents balk: the beginning of the discussion of the bird and the bees.

Barbara Long, M.D., M.P.H., who’s worked as an adolescent doctor for more than 20 years, says these questions are often more benign than parents believe. “Sex is not a freak-out thing, but it tends to be perceived that way,” she says. “We worry about it! But if we’re matter-of-fact and use the right kind of language, it doesn’t have to be.”

The trick, according to Dr. Long, is to answer only what’s being asked; add more detail later, or upon further interrogation. “A baby comes from the mom” can easily expand into, “Mom pushes out the baby at the hospital.” Often, that might be enough. By giving the simplest answer, parents can maintain a developmentally appropriate conversation over time.

By 9 or 10 answers become more nuanced: “Mom has an egg and dad has sperm, and they get together and make a baby.” If a child asks how, then it’s time to break things down into penises and vaginas. While Dr. Long recommends using the correct words for each body part, she says it’s more important for parents to feel comfortable.

Parents can initiate conversation outside of the kitchen table to keep the discussion light: Dr. Long suggests using television, which often implies sexual activity, as a jumping-off point to talk about dating relationships, birth control or safe sex in the context of other people.

“I want to break down the myth that kids don’t want to talk to their parents about sex,” she says. “They want to talk, they don’t want to be talked at – there’s a big difference.” Parents can make it a two-way street by asking what their child thinks is happening, or how they feel about it.

A holistic approach to the conversation also helps kids to be in a better position when they’re teenagers. “We really just want our kids to make good decisions,” Dr. Long explains. “At 13 to 15, you’ve already done your work. They’re making decisions that are a reflection of their upbringing. That’s why the ongoing discussion is important.”