This article was written by Katie Vaughan and illustrated by Sol Linero. It originally appeared in the Portland Monthly 2016 Kids’ Health Annual magazine.

When kids are bombarded with messages about how girls and boys should act, families can help cut through the noise with a conversation.

With gender in the headlines – toy aisles ditching their pink and blue labels, the shocking pay gap for our Women’s World Cup champions, the evolution of Caitlyn Jenner – the complicated topic can feel like a news trend of the day. Of course, ideas about gender and its role in our lives, and in children’s development, are not trends at all. We’ve been carrying them around since we were born.

“The perception of gender impacts everyone throughout their lives, because of what gets imposed on us about gender roles, gender norms and societal expectations,” says Amy Penkin, program coordinator of the OHSU Transgender Health Program.

What’s new – and healthy – about today is the dialogue.

The definition of gender is still fluctuating in the medical community, but here’s the general idea: Sex is anatomical and chromosomal. Gender is how you identify psychologically or emotionally.

“Gender identity is about the inner sense of self. It’s about how we perceive ourselves,” says Dr. Kara Connelly, a pediatric endocrinologist at OHSU Doernbecher Children’s Hospital. Gender can be reflected in the way we think, feel, behave and present ourselves.

Children absorb ideas about gender from all directions. As a parent, it’s easy to be intimidated by the lingo or overwhelmed that everything children see and hear about gender could impact their development. So we asked child and family health care professionals how parents can tackle gender issues and raise healthy kids – who aren’t burdened by unhealthy stereotypes.

Children start to identify gender at a very early age. In most cases, a child will start to develop their own gender identity as young as 3. As they grow, children want to understand how they fit into the world, and their gender identity is an important part of that development.

Sometimes, what a child determines to be their inner identity conflicts with how society expects them to behave, which can be damaging to their sense of self.

“It creates a lot of internal conflict if a child’s beliefs about who are they are differ from the outside world’s acknowledgment of that identity,” says Dr. Naomi Fishman, a child and adolescent psychiatry fellow at OHSU.

It can be as simple as a girl feeling bad because the toys she wants to play with are considered “boy” toys or as complex as a child being ashamed and confused because their inner gender identity doesn’t match their outer appearance.

Kids can take in a lot of ideas just by observing what their parents say and do, but constantly worrying about whether you might be passing on judgments or reinforcing stereotypes will drive parents crazy. Fortunately, the solution is simple.

Dr. Fishman says it starts with taking time to listen: “If you want to support your kids in exploring their gender, be genuinely curious and spend time with them.”

If you’re worried about using the most PC terms and asking all the right questions, don’t be.

“You don’t need to interrogate them,” says Dr. Fishman. “Just be open, available and supportive. Allow kids to be honest about exploring their gender identity.” 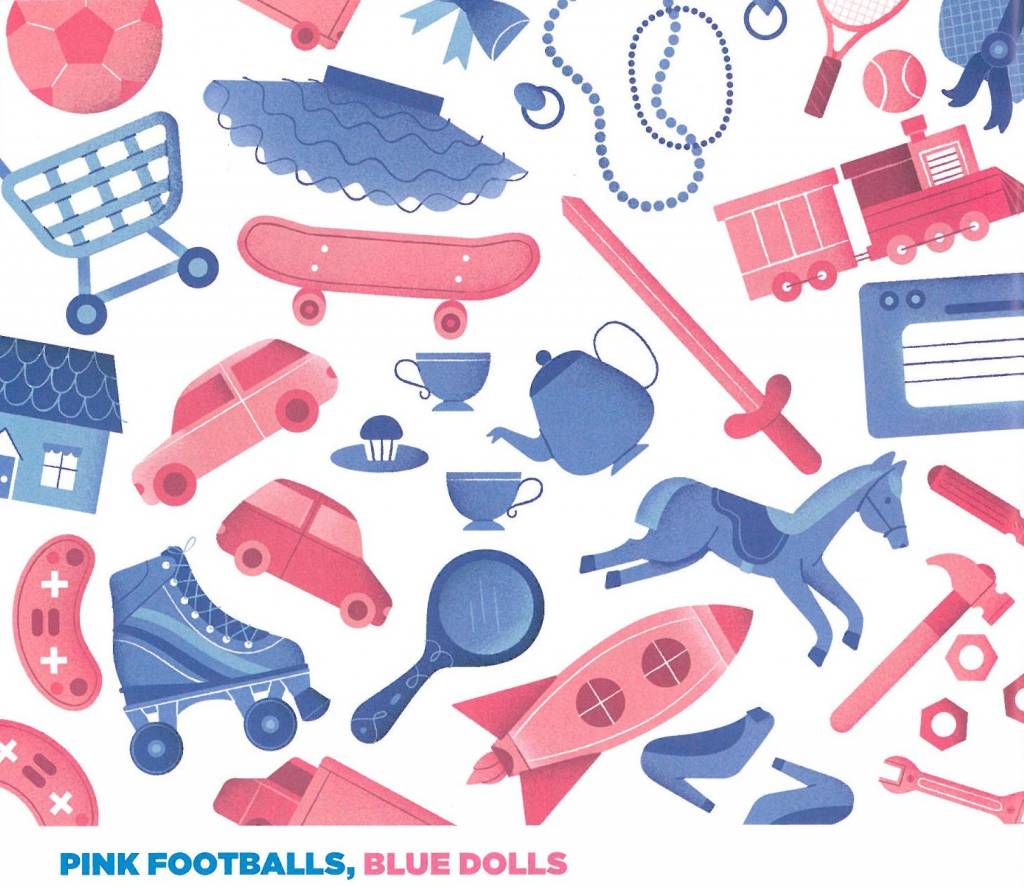 A lot of the messages children receive about gender come in the form of societal stereotypes, and it starts before we’re even born. Picture a standard baby shower, with everything from decorations to gifts to the cake in either pink or blue.

Kids start to notice these stereotypes right away. If your child repeats some conventional idea they’ve picked up somewhere (“girls play with dolls and boys play with trucks,” “pink is a girl color,” “boys are better at science”), Dr. Fishman advises taking it as an opportunity to talk openly: Ask your child if they believe it’s true. Encourage kids to talk about how they feel about a certain color or toy, instead of focusing on what someone else told them. You don’t need to be laser-focused on the minutiae of gender stereotypes and how you (or your friends or teachers or coaches or movies or…) might be passing them on. If you have an open mind and keep the conversation flowing, you’re on the right path.

Internalizing gender stereotypes can affect more than just the toys children play with; they can be especially damaging when it comes to body image.

“Kids today are inundated with images of what is supposed to be beauty and strength and power and desirability,” says Dr. Craigan Usher, program director of Child and Adolescent Psychiatry at OHSU Doernbecher. “We’re seeing the impact of that in a lot of ways, like the increased rate of disordered eating in the last 20 years or so.”

The best thing parents can do to help children deal with body issues and other negative effects of stereotypes is to make space for the multitude of ways in which someone can be a man or a woman.

“Expose kids to the different ways that people can dress and think, feel and look,” says Dr. Usher, adding that Doernbecher also offers a variety of psychiatric and therapeutic resources for adolescents who are struggling with gender identity or body image.

So while the repercussions of stereotypes and how they play into gender identity can seem limitless, the overall advice from health professionals is this: Don’t worry too much! Stay open-minded. Listen. Encourage kids to express themselves honestly and show interest in what truly makes them happy. And, hey, maybe start a family petition to address the pay gap for those Women’s World Cup athletes.

If children start to determine their gender identity as young as 3 years of age, that means that some children might realize early on that their gender identity doesn’t match their external appearance. Children easily pick up on gender stereotypes, and our society is constantly reinforcing ideas about how a certain gender should look, think and behave. That can lead to a lot of confusion and shame for children who feel pressured to look or act in a way that doesn’t line up with how they feel.

Every person is unique, and every person’s gender expression is unique. That also means each path to a comfortable gender identity is different. In their quest, some people may choose to change their name, style their hair a certain way, or be called by a different pronoun. Others might choose to undergo full surgical transitions. No matter the path, the earlier a person can start this process, the easier it will be in the long run.

“If kids are supported in their quest to explore their gender identity and expression from an early age, they can often be saved from years of emotional and psychological distress,” says Dr. Connelly.

As with most other issues families face, the path to raising a healthy and happy transgender child starts with an open mind.

“When you accept your child’s expression early on and allow them to live that role, your child can live a much more anxiety-free life,” Dr. Connelly says.

Still, parents don’t need to jump to conclusions: “A boy who wants to wear dresses for a while is very different from a boy who says with certainty, ‘I am a girl,'” she notes. “All children should be allowed to express their identity in a way that makes them feel comfortable.”

Gender transition may be in the public eye more these days, but it’s certainly not new. “We’ve been helping patients transition for decades,” Dr. Connelly says. “The hormones and surgical processes are not new.”

But with more public awareness comes, hopefully, more acceptance and more connections. Transgender youth have higher rates of anxiety and depression and a higher risk of suicide than cisgender children (those whose internal gender matches their sex at birth). They are also more likely to face bullying and abuse.

“Transgender kids really benefit from support and meeting other gender-diverse kids and families who are going through the same thing,” says Dr. Usher. “It helps to know that there are other people out there confronting the same issues and that there is a path for them.”

In 2014, OHSU created a work group devoted to improving transgender health services. The group hopes to better support children and families who may be struggling with gender identity considerations. Their aim is to improve access and links to a variety of resources, including mental health consultations, ongoing individual or family therapy support, hormone treatment, physical transitions and more.

Dr. Usher believes the increasing health resources for transgender youth and their families mean we’re moving in the right direction, but the psychology of gender transition is still a changing field, with still more steps to take in our growing understanding. Much of the study done on the topic in previous decades was heavily influenced by societal constructs.

“Even the term ‘gender dysphoria,’ which is now included in the latest psychiatric diagnosis manual, is problematic,” says Dr. Usher. “It implies that a child or teen needs to be sad because their internal gender doesn’t match their external sex; it doesn’t leave room for someone to be happy or proud.”

4 responses to “Let’s talk about gender”