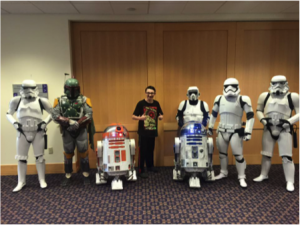 Earlier this year, OHSU Doernbecher Children’s Hospital patients, family and employees were treated to a special visit from Star Wars characters from the Cloud City Garrison thanks to the hard work of 14-year-old Doernbecher patient Justin. Below, Justin’s mom, Joanna, shares her son’s story and why this project meant so much to their family.

When he was only 3 years old, Justin was diagnosed with Type 1 diabetes. We had been noticing that he was urinating frequently and was thirsty all the time. Coincidently, I had heard about the symptoms of Type 1 diabetes from a co-worker of mine, two weeks prior to Justin’s diagnosis. When Justin began exhibiting those same symptoms (extreme thirst, frequent urination, loss of weight, etc.), I knew we had to get Justin in to see his pediatrician.

They initially did a urine test, and the nurse came back in the room and stated that Justin had sugar in his urine. They then did blood work to confirm the diagnosis of Type 1 diabetes. Because he wasn’t sick, Justin wasn’t really aware of what was going on – but my husband and I cried when we heard the diagnosis. As parents, we were scared. At the time, we lived south of Eugene and Justin’s pediatrician immediately sent us up to OHSU Doernbecher Children’s Hospital.

Doernbecher welcomed Justin and our family with open arms when we arrived. We met with many people at the time of his diagnosis, including his new pediatric endocrinologist, Dr. Bruce Boston. Justin’s child diabetes educator, Joannie Kono, also met with us to go over all of Justin’s insulin needs and talk through what life would look like with Type 1 diabetes.

We were in the hospital and all of the nurses, volunteers and doctors were extremely supportive. Justin remembers having his blood pressure checked because the cuff had dinosaurs on it – every time his blood pressure was taken, Justin said it felt like the dinosaurs were giving his arm a big hug. The nurses thought that was cute!

There were many wonderful volunteers that came in to play with Justin so that my husband and I could take time to learn everything there was to learn about Type 1 diabetes and our new life with this disease.

Everyone involved in Justin’s care was compassionate, and it made our time there much more enjoyable, given the circumstances. He’s been going to OHSU for his diabetes care since his diagnosis and he continues to see Dr. Boston and Joannie Kono.

Doernbecher Children’s Hospital is a wonderful place to be, with a lot of amazing, caring people. I would tell other parents that they’re in the best hands at Doernbecher. The doctors, nurses and volunteers are extremely compassionate, giving individuals and the staff made our time at Doernbecher memorable. 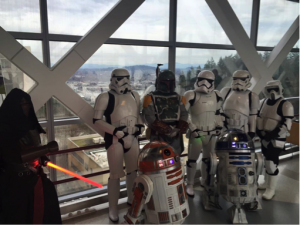 When Justin was planning a community service project, he didn’t even have to think twice about what he was going to do. Doernbecher has been a place he’s remembered since his diagnosis, and he wanted to find a way to give back to the hospital that gave to him and to our family in his time of need.

Justin wanted to bring joy to the patients and families at Doernbecher – and he LOVES Star Wars – so he emailed the Cloud City Garrison (a chapter of the 501st Legion of Stormtroopers) to see if they’d be willing to volunteer their time to help out. Justin explained his service project and requested support from Target and Lowe’s, which both donated toys to hand out to Doernbecher patients and families. It was a great success!

On the big day, Justin got great satisfaction in seeing the looks on people’s faces – children, families and employees – when they saw that the Star Wars characters were coming in to bring joy to patients and families. He says “it was a joy to my heart” and wants to do this community service project every year.

2 responses to “The force is strong with this one: Justin’s Doernbecher story”