If I could describe the emotion in one word surrounding my first pediatric ingestion admission, it would be fear. On all levels. We were admitting a 3-year-old male after he accidentally ingested a laundry detergent packet. There was fear of the complications, but most notable, there was fear of the unknown. The toxic effects of laundry packet ingestions at that time were minimally understood. This was a new phenomenon. And as a newly minted resident, I also had a sense of uncertainty and fear.

In true first-year resident fashion, I went to the quickest, most reliable online resource available to me. I wanted to be prepared for all possible complications. As one would expect, I had the usual first-year resident jitters, however, my nervousness grew as I continued reading down the page. I had heard about laundry detergents packets; they were deemed as convenient and innovative without the mess. Laundry detergent packets, however, took on a new meaning that evening.

If ingested, I read, the highly concentrated packets can lead to vomiting, oral burns and swelling, respiratory distress and even respiratory failure – not to mention the neurologic impacts such as seizures, lethargy and, worst-case, coma. On the other hand, if the package breaks, they are likely to explode in the child’s face with risk of corneal abrasion and damage to one’s vision. The following day, my patient underwent an urgent upper endoscopy revealing a significant esophageal burn carrying the life-long risk of esophageal scarring. Unfortunately, that evening was not my first encounter with the hazards of laundry detergent packets.

The above story is a common one and one that has been echoed around the country. Ever since their introduction to the U.S. marketplace in 2012, laundry packet exposures have occurred at astonishing rates. In 2014, Smith et al. published a study in the Journal of Pediatrics outlining the trends in laundry packet exposures and risks associated with such. Over the course of one year (March 2012 to April 2013), there were more than 17,000 laundry packet exposures [1]. This represented a more than 600 percent increase in the number of monthly exposures. A subsequent article published by the same authors describes similarly daunting figures with a 17 percent increase in laundry packet exposures in the following year, 2013 through 2014 [2]. This 17 percent increase is despite mutually agreed upon voluntary safety standards by manufacturers. Of most concern, the majority of these exposures are occurring in young toddlers under the age of 3. Not only are these packets easily accessible, they are brightly colored and bite-sized; the perfect combination for a newly walking, explorative toddler.

As I enter into the third and final year of my pediatric residency training and prepare for a career in pediatric gastroenterology, this problem has taken on a meaning of its own. I have come to understand the role of advocacy and the inherent responsibility we as pediatricians carry to educate parents and families. Herein lies the spark for our most recent efforts at OHSU: a call to action to Pass on Packets and buy traditional laundry detergent for those with children under the age of 6 years. While this endeavor feels insurmountable, we are banding together with fellow pediatricians nationwide to disseminate this message, with the hopes of driving change and saving lives. Change must begin somewhere, and I hope that somewhere is in Portland. On June 7, Doernbecher is launching a social media campaign to #PassOnPackets – and we hope you’ll join us! (Details below.)

How to participate in #PassOnPackets:

Take the pledge to pass on packets by sharing one (or more!) of the below infographics on the social media platform(s) of your choice and use the #PassOnPackets hashtag. Also, join us from 11 a.m. to noon PDT on Tuesday, June 7 for a #LaundryPackets Twitter chat, hosted by @PreventChildInj. 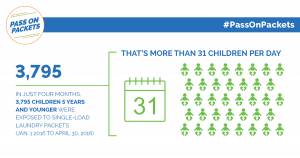 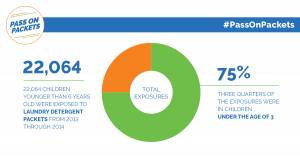 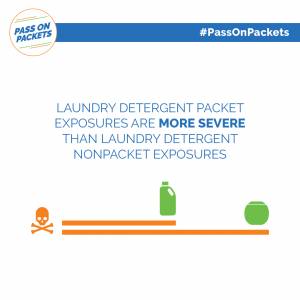 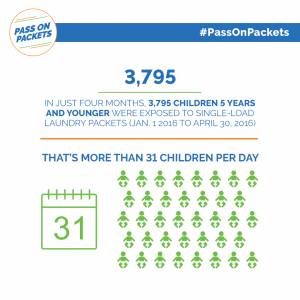