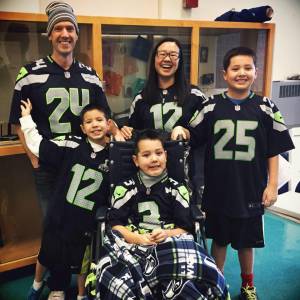 In December 2014, a sneaker wave hit 10-year-old Andy Grass and his brothers while visiting Rockaway Beach, Ore. The boys jumped on a log to avoid the sneaker wave, but Andy fell and the log rolled on top of him, resulting in multiple serious injuries.

Below, Andy’s dad, Paul, shares how Andy’s hospitalization and prolonged recovery affected their family – and how it continues to teach all of them strength, resilience and healing.

Our world was forever changed on December 24, 2014. And while our story will be told with a happy ending, it began with the most terrifying experience we could have ever imagined. It has been 18 months since Andy’s accident, but the memory of finding our son trapped under log is hard to erase from our memories. After we were able to dig him out from under the log and secure him to safety, he rested calmly in his mother’s embrace until the ambulance arrived. With broken bones all over his body and injured internal organs, Andy was able to save his last breath until he arrived at the hospital. As his second lung was collapsing and his world was about to go dark for many days his final words were, “What did I get for Christmas?” 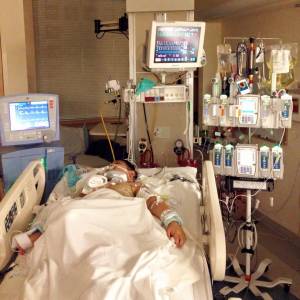 I will never forget the words from his trauma doctor at OHSU Doernbecher when we arrived at the hospital that evening. They were: “Andy has a very good chance of surviving if he makes it through the night.”

The words were impossible to process. My wife and I struggled with the reality of the accident for 24 hours – from shock, to disbelief, to immense emotional pain. In the early hours of December 25 – Christmas Day – my wife, Anna, posted a message on her Facebook profile. It simply said, “Andy has been in an accident. Please God, let him live.”

From that moment on, the outpouring of support for Andy from family, friends and even complete strangers is what kept up our strength for the next three weeks in the hospital. We received hospital visits daily, meals for our family and enough words of encouragement to last a lifetime. The support came from school teachers, church friends, our Murrayhill Little League baseball community, the doctors and nurses at Doernbecher, and so many others. In particular, his Aunt Peggy (who ultimately succumbed to breast cancer at age 36 – six months after Andy’s accident) was a tremendous source of inspiration and comfort as they both battled their own situations. 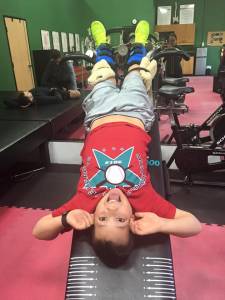 When Andy was released from the hospital we were told his recovery could take up to two years or longer. Over the last 18 months he has endured more doctor’s visits than any kid deserves and has been through at least 100 physical therapy sessions. He went from bed, to wheelchair, to use of a walker, and then slowly to unassisted walking and now running.

His progress is a testament to his positive attitude, his “never give up” mentality, and his physical therapist (Kandice at ADAPT Training), who gave him the strength and encouragement on the rare days he couldn’t find it himself.

Andy is now back to playing with friends, hitting baseballs and shooting jumpers on the basketball court. Working with Nike and OHSU Doernbecher as a Doernbecher Freestyle patient-designer has been a wonderful time of reflection and healing for Andy and for our entire family as we continue to remain “Grass Strong.” 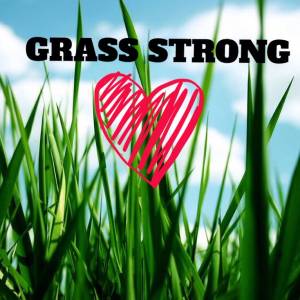 Learn more about “Grass Strong” and how the Grass family’s community rallied around them here (via KOIN News). Then, get to know 11-year-old Andy and the rest of this year’s incredible Doernbecher Freestyle patient-designers. We hope we’ll see you at this year’s collection reveal and auction on October 28!