When she was 8 years old, Braylin Soon was diagnosed with Autoimmune Hepatitis and underwent an emergency liver transplant.

We sat down with her parents, Kevin and Delinah, to learn more about their daughter’s story and how the experience challenged and changed their entire family. 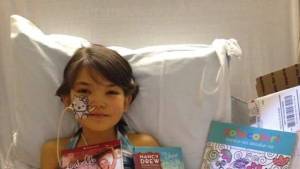 May 2014 was a big month for the Soon family. Their oldest daughter, Braylin, was cast in a production of “Les Misérables.” Her older brother, Isaac, was finishing up his time at elementary school and they were planning a birthday party for their youngest daughter, Addison, who was turning 7.

“At Addison’s party, Braylin threw a bit of a tantrum about the cupcake she was given,” Delinah said. “This was completely out of character for Braylin, so we decided to end the party and go home.”

Things seemed to return to normal the following the week. Braylin met the “Les Misérables” cast she would be working with over the summer. Delinah was busy running the school book fair. Braylin’s behavior had gone back to that of a typical 8-year-old girl, though she did have several nosebleeds.

“On Thursday, we noticed Braylin’s eyes were yellow. We called the pediatrician and went straight over to her office, where she drew some blood and said she’d call with results,” Delinah said.

The next day, Braylin’s skin had a yellow tint – so they rushed her back to the doctor’s office for additional tests.

Just after dinner on Mother’s Day on May 12, Braylin’s pediatrician called and said she was concerned about Braylin’s labs. She told the Soons to head to OHSU Doernbecher Children’s Hospital for IV fluids overnight to flush out Braylin’s kidneys.

“Braylin happily snuggled into the hospital bed and we were set for a restful night,” Delinah said. “One night turned into nine nights and a change in her diagnosis.”

Braylin’s parents learned their daughter was in acute liver failure and she was diagnosed with Autoimmune Hepatitis. She was born with the gene that causes the disease, which had activated and was responsible for the quick decline in her health. The bloody noses, yellow skin/eyes and even the change in her mental state (i.e., the birthday party tantrum) were all symptoms of the liver failure.

“Our hearts sank as we learned that our daughter needed to be transferred to another facility in the event that she may need a liver transplant,” Delinah said. “Braylin was sad because she realized this could jeopardize her dream to be in ‘Les Misérables’ – and maybe more.”

On May 21, 2014, three hours after the devastating news, Braylin and Delinah gave big hugs to their family and boarded a Life Flight jet headed for Lucile Packard Children’s Hospital Stanford.
When Braylin was stabilized and moved to a room, a caseworker sat down with Delinah. It took three nights in the ICU to fully understand how severe Braylin’s liver failure was, and it was determined that she would, in fact, need a transplant. It was such an urgent case that she would be at the top of the UNOS list.

“Nothing we had experienced in our lives could compare to that moment – we were just told that our daughter was dying and her only chance to live was for another child to die in the next few days,” Delinah said. “The stress was nearly unbearable, especially with our family being separated.”

On May 29, one of the main surgeons walked into Braylin’s room with a smile on his face and a cloth bag that said “Caution: Live Organ.”

“Congratulations, Braylin!” he said. “We have a liver for you.”

Delinah asked the inevitable question: “It’s not in the bag, is it?”

A little humor in such an emotional moment was exactly what the Soons needed. Braylin was pretty sleepy but she quietly lifted her right hand and whispered, “Yeah!”

Delinah called Kevin and he caught the evening flight down to Palo Alto.

“We sat with Braylin through the night,” Delinah said. “In the morning, we helped get her ready for her surgery: We washed her body, braided her hair and cleaned off her nail polish.”

Braylin was taken into surgery at noon on May 30. Kevin and Delinah sat for a while in the waiting room but most parents were there for their child’s appendicitis or tonsils, so they spent the majority of the day outside walking and talking. Eventually they headed back in and waited until one by one each family member left. They were the only ones left.

At 6:30 p.m., Braylin’s main surgeon, Dr. Carlos Esquivel, walked through the door and sat with them.

“He said our daughter was a pretty sick little girl,” Delinah said. “She only had about 2 percent liver function left but the transplant had gone as expected – she was doing well and would be out of surgery in a bit, when we could finally see her.”

The sigh of relief in that moment was the biggest the Soons had breathed in a month. A few hours later they were sitting with Braylin back in the ICU. It was hard seeing her hooked up to all the machines with a breathing tube, Delinah said, but when she opened her eyes they knew she would be OK and back home arguing with her siblings in no time.

And she pretty much was.

Braylin was discharged from the hospital a week after the transplant and her family moved to the Ronald McDonald House. Braylin continued to have daily blood draws and clinic check-ins until her team at Stanford determined that she was healthy enough to return home.

They arrived home on June 21 and started to figure out life with a medically fragile child.

“Since returning home, Braylin has continued to thrive and grow, thanks primarily to Dr. Amy Garcia and her outstanding care,” Delinah said. “Braylin passed a milestone – two years post transplant – in May and she treats every day as a gift.”

She has enjoyed any opportunity to give back to Doernbecher, including her annual birthday toy drive, which this year resulted in 250 gifts being available for patients who need something to smile about.

“She thinks of Doernbecher as a safe and happy place, and that has everything to do with the wonderful people who work every day to give children hope and health,” Delinah said.

And for those wondering – yes, Braylin made it back to rehearsals in the middle of summer and was able to complete her “Les Misérables” dream. As an added bonus, her GI team from Doernbecher even bought tickets and came and saw the production! 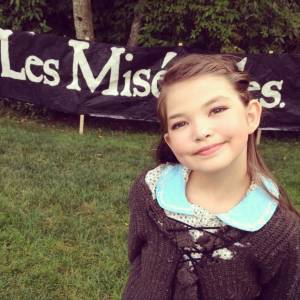 Ten-year-old Braylin is one of this year’s Doernbecher Freestyle patient-designers. Watch the moment she learned she would be designing custom Nike shoes and apparel (around the 0:30 mark): https://www.youtube.com/watch?v=63a5_bZvvlw

Learn more about Braylin and the rest of this year’s incredible Doernbecher Freestyle patient-designers here. We hope we’ll see you at this year’s collection reveal and auction on October 28!