This article was written by Scott Henjum and originally appeared in the Portland Monthly 2017 Kids’ Health Annual magazine. 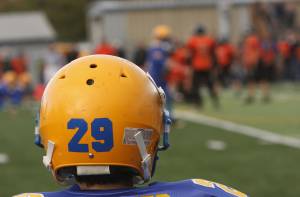 Your child doesn’t need to be a high school football star to be at risk of a concussion. Also called mild traumatic brain injuries, concussions can be caused by any serious impact to the head, most commonly during a high-contact sport, a fall or a bike or car accident.

Jim Chesnutt, M.D., a sports medicine physician at OHSU and a concussion management expert, advises that athletes be immediately removed from sports and taken to a medical provider if they show signs of concussion, which include the following:

“Concussions can last from minutes to hours, weeks, months or longer,” says Dr. Chesnutt. “Fortunately, in about 80 percent of cases, people recover from concussions within three or four weeks.”

Rest is critical to treat a concussion: It helps the brain heal. Toddlers should avoid stimulation like loud music and television; school-age children should also avoid video games and texting. Students may need to take a few days off from school and limit homework, especially assignments requiring prolonged computer use.

“Researchers have determined that [step-by-step] transitions are critical to treat a concussion,” says Dr. Chesnutt. “It is important to modify school attendance and academic programs for a few days to allow a gradual return to cognitive and psychological stresses.”

OHSU and OHSU Doernbecher concussion specialists usually recommend approximately a two-day period of rest before transitioning back to schoolwork, and at least a weeklong break from athletics. Student athletes can return to contact sports only after obtaining medical clearance and following a “Return to Play” protocol.

Too much rest, however, can be detrimental and slow the recovery process.

So encourage your kiddo to hit the pillow for a couple of days – and then it’s time to hit the books!

If you are concerned your child has suffered a concussion, talk with your pediatrician or call the OHSU Sports Medicine Clinic at 503-494-4000.