This article was written by Scott Henjum and originally appeared in the Portland Monthly 2017 Kids’ Health Annual magazine.

To test or not to test? 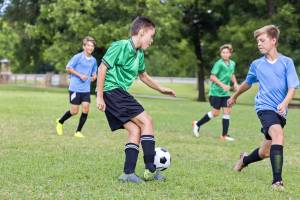 Parents of teen athletes face this question every year as they debate whether to sign up their children for heart screenings along with pre-season physical exams. Also known as electrocardiograms, EKGs measure the electrical activity of the heart in order to identify heart defects, but results are rarely conclusive.

The number of heart screening clinics has grown over the past decade as media attention has spotlighted sudden death in athletes. Along the way, the debate about the accuracy and efficacy of the EKG testing has intensified.

“EKG testing can generate false positive and false negative results,” explains Dr. Seshadri Balaji, a pediatric cardiologist at OHSU Doernbecher Children’s Hospital. “An athlete may have an underlying heart problem, but the EKG can miss it. In other cases, the EKG may show something that looks abnormal, and the athlete is subjected to a battery of tests that are risky and expensive, only to generate results that show the heart is normal.”

Dr. Balaji notes that sudden death rates in teens and teen athletes are minuscule, especially compared to deaths from other causes like car accidents or suicide.

Dr. Balaji says it’s critical for teen athletes (and all teens) to disclose to their medical providers if members of their family have heart conditions, especially if anyone has died from a sudden or unexplained death at an age younger than 35.

Athletes who experience fainting, lightheadedness or shortness of breath should also be examined by a medical provider, Dr. Balaji says. These symptoms could be explained by asthma, but heart conditions need to be considered as well.

What’s not up for debate, however, is the usefulness of automatic external defibrillators (AEDs). Instead of EKG testing of young athletes, the AHA and ACC recommend wider distribution of defibrillators that can treat an athlete in sudden cardiac arrest. Defibrillators have proven effective in saving young lives on the athletic field and elsewhere.

If you are unsure about whether your child should be screened for a heart defect, talk with your pediatrician or call OHSU Doernbecher Children’s Hospital at 503 346-0640.