Eighteen-year-old Ryan Bernstein is a youth advocate for Obsessive Compulsive Disorder (OCD), having lived with it for many years. He is the author of “OCD to Me: An Anthology of Anxieties,” and he’s a National OCD Ambassador for the International OCD Foundation, as well as an OHSU volunteer in the Healing through Music Program. OCD Awareness Week runs each year during the second week of October. We asked Ryan to share some of his journey and how he’s advocating for other individuals with OCD. 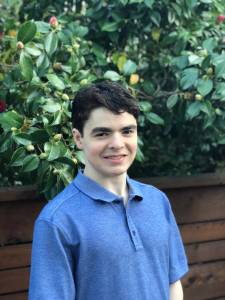 Imagine you can’t get out of your bed in the morning without doing a multi-step process perfectly six times. Or what if you couldn’t type on a keyboard without retyping each word nine times?

This is Obsessive Compulsive Disorder (OCD).

It is so much more than excessive hand-washing or being meticulous. OCD is powerful and pervasive. I know because I’ve had to deal with it. What was especially challenging for me was not getting an accurate diagnosis until just a few years ago. When you don’t know why you feel anxious all the time, it can be self-defeating.

Why did you decide to write a book?

“OCD to Me: An Anthology of Anxieties” came out of feeling lost during that difficult period in my life. I wanted to educate people and raise awareness about OCD. I wanted those struggling with OCD to know they are not alone. I focused on what it feels like to have OCD because too often the viewpoint is from recovery – so I collected 60 powerful stories from people around the world who shared their experiences. My book also contains resources and tips from nationally recognized experts in anxiety disorders.

Why do you think it’s so important to talk about OCD?

I believe that the more we can talk about it, the more we can learn from one another. Mental illness is associated with negative stigma. People worry about being judged. It takes courage to share because OCD tries to make you feel helpless and hopeless. The more we learn, the more we can change misconceptions.

What have you learned and what advice can you give to others?

I’ve learned that OCD is diverse. I’ve learned that reaching out is not only empowering – it also matters. I started an anxiety group at school where we discuss coping skills and how we’re feeling and the response has been positive. My advice is to take tiny steps and never stop believing in yourself.

All proceeds from the sales of Ryan’s book will be donated to the International OCD Foundation.