After a Fanconi Anemia diagnosis, Joaquín and his mom relocated to Portland from Chile to receive life-saving care at OHSU Doernbecher Children’s Hospital

By all accounts, Joaquín “Joaco” Du Monceau de Bergendal had a normal childhood growing up in Chile.

His mother, Pía Labarca, described him as a straight-A student who enjoyed yoga and music.

“He was one of those kids everybody loves,” she said. 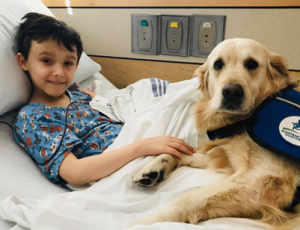 After losing her father in Hurricane Maria in 2017, Pía and her family traveled to Puerto Rico to visit family there.

“Joaco was tired,” she remembers. “We thought it was just the loss of his grandpa.”

The family knew something was seriously wrong back in Chile a few months later, when Joaco couldn’t make it to the neighbor’s house on his bicycle.

“He was very pale,” Pía said. “My husband is a pediatrician and immediately started making phone calls.”

At the clinic, Joaco’s hemoglobin levels measured at 4.4 grams per decileter.

“He never felt ill – he just said he felt a little tired,” Pía said. “At the clinic, we were told, ‘We don’t understand how he’s walking.’”

Joaco’s genetic tests were sent to the U.S., and on October 13, they learned he had Fanconi Anemia, a severe and frequently fatal genetic disease that causes birth defects, bone marrow failure and increased risk of cancer. 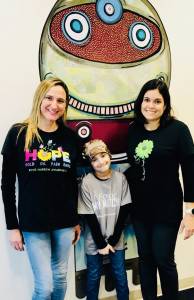 Their family and friends jumped into action, forming a “medical committee” and calling everyone they know. One friend emailed 25 physician friends and oncologists in the U.S. with a plea: “I need to contact somebody who does bone marrow transplants for Fanconi Anemia.”

Three of those emails were forwarded to Dr. Eneida Nemecek, director of the Pediatric Bone Marrow Transplantat and Cellular Therapy Program at OHSU Doernbecher Children’s Hospital.

Over the weekend, Pía received an email from Dr. Nemecek.

“She actually wrote to me, asking what she could do for me and inviting me to call her, even though it was the weekend,” Pía remembers. “She was incredibly caring and calm.”

Pía took it as a sign that Joaco would be well treated and loved by Dr. Nemecek and her team. Three weeks later, she and Joaco packed up their lives and headed for Portland.

“We arrived here in shock on November 4 and had our first appointment on November 6. We didn’t have a donor at the time, but had already sent the samples from Chile,” Pía said.

Transplant and donor search coordinator Allison Franco – or “Saint Allison,” as Pía calls her – had already opened up a transplant file for Joaco before they arrived. She worked with Be The Match and DKMS to identify a match: a 27-year-old man from Germany.

“He said yes,” Pía said. “He kept saying yes even after knowing what he was going to go through.”

On January 8, 2019, Joaco was admitted to OHSU Doernbecher Children’s Hospital. He turned 8 in the hospital on the 14th, and on the 19th, he received 6 million stem cells from that anonymous donor.

Though Joaco’s journey is far from over – he’ll have to continue check-ups for the next five years – his family wanted to express their gratitude for the support they’ve received from their care team, including Dr. Nemecek, “Saint Allison,” the Child Life program, the Hospital School Program and so many more.

“We feel very, very blessed. We’ve been held by the faith and love and light of so many people,” Pía said. “I know that Joaco has a purpose in life. He will grow with a certainty, with the absolute conviction, that love heals.”

Learn how you can join the Be the Match registry and offer hope to patients like Joaco.