Two-year-old Nathan has been transported by the PANDA (Pediatric And Neonatal Doernbecher Transport) team three times in his short life so far. This year for Halloween, Nathan and his siblings decided to dress up as the team that helped save his life. 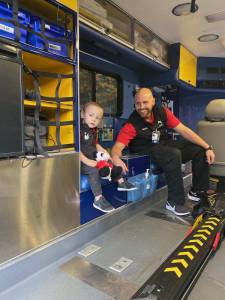 Nathan was a micro preemie born at 26 weeks, weighing 2 pounds, 4 ounces. He was cared for in the Salem NICU for the first few weeks of his life. At 30 weeks gestation (about a month old), Nathan needed a PDA ligation and was transported by the PANDA team to the OHSU Doernbecher NICU at just over 2 pounds.

They showed amazing compassion and skill and even though it was a tough and scary transport, they were all so calm and took amazing care of Nathan.

The second time he was transported by the team was after that surgery in the NICU. He was 34 weeks gestation, just over 3 pounds and well enough to go home to Salem.

The third and final time he was transported by the team was due to a respiratory infection when he was 6 months old. The team again showed such amazing compassion and skill. Nathan was in a NICU (either in Salem or at Doernbecher) for a total of 105 days.

The PANDA team have done numerous IV’s on Nathan in the Emergency Department and during hospital admissions throughout his life. No one else could get an IV in his damaged, tiny veins and I can’t thank them enough for how much they have helped my little boy.

Nathan is now an energetic 2-year-old, and he’s thriving despite being a micro preemie. He’s still tube fed and TPN dependent, but overall he’s a healthy, happy toddler. A lot of that credit goes to the PANDA team because of the skill and compassion they showed during those transports when he was so sick. Thank you, PANDA team!