It all started with a baby and his fox.

In July of 2019, Cypress had just turned 4 months old. His pediatrician sent him to the OHSU Doernbecher Emergency Department, where his mom, Kat, remembers thinking they would get some antibiotics. Instead, Cypress was diagnosed with a rare, aggressive form of cancer called T/Myeloid Leukemia.

“We showed up at the Emergency Department with a diaper bag and didn’t leave for two and a half months,” Kat said. “I’ve found that this is not uncommon.”

Cypress underwent three rounds of chemotherapy treatment and received a bone marrow transplant. He relapsed before leaving the hospital in an unexpected and uncommon way, with leukemia cells presenting in his skin. Cypress also did 15 days of outpatient radiation at OHSU.

When he was 14 months old, Cypress was admitted to OHSU Doernbecher for pain management and end-of-life care.

Cypress had an open heart and a gift for connecting with people. He especially loved seeing his friends on long walks around the Hematology/Oncology unit. 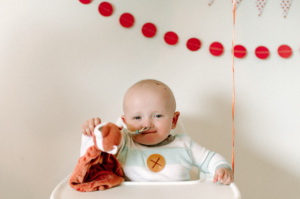 Cypress was a cultivator of firsts and used them as a stepping stone for learning new things. First foods (he liked mangos, yogurt and teething biscuits), first smiles and first word (it was “num”). Cypress’ first roll onto his tummy turned into his first scoot across the floor. His first book turned into a love of being read to, especially Where The Wild Things Are. And his first friend, his beloved fox blankie, “Foxy,” became his favorite companion on a night when he was having a hard time withdrawing from chemo.

“I pulled Foxy out and he immediately grabbed it, calmed down and never let go,” Kat said. “We actually had 10 of them in case one dropped on the floor.”

The impact that Foxy had on Cypress, coupled with Kat’s own experiences as a parent of an infant who received about 10 total months of inpatient hospital care, inspired her to found a non-profit to help support other infants and families through similarly long hospital stays.

“Through our journey we learned just how much infant-specific support is really needed,” Kat said.

And so Foxbox was born.

Families at OHSU Doernbecher who have anticipated stays of 3 weeks or more are referred by their Child Life Specialist to apply for a Foxbox. In the Pediatric Intensive Care Unit (PICU), Foxbox worked with staff to build a PICU specific box for babies with an anticipated stay of one week or more.

“We are truly grateful to bring Foxbox to babies and their families in the Doernbecher PICU,” said a PICU nurse. “The Foxbox team has worked with us to curate boxes that will not only support the growth and development of our babies in the critical care environment, but also bring hope and comfort to their families.”

Foxbox supports infants ages 0-12 months who are admitted to the hospital for three weeks or longer. Kat’s team developed five different kinds of boxes, each centered around developmental stages in a baby’s first year. Families select which Foxbox best fits their baby’s needs at the time. Families are eligible to reapply every two months if they have another anticipated stay of three weeks or longer in the hospital.

“It’s essential to our mission that families feel supported throughout their baby’s entire first year of life during their long hospital stays,” Kat said.

“When families apply, we get to know their baby’s unique personality, likes and dislikes,” Kat said. “We then build their Foxbox based on who they are as an individual as well as their unique developmental, educational and social/emotional needs.”

These customized boxes might include baby carriers, support pillows, coffee, tea, or water bottles and mugs for caregivers, and they also provide comforting items for siblings.

Kat credits the combined skills of Foxbox board members, support from partners like Ergobaby, Baby Tula, YETI, Slumberkins, Caspar Babypants, SmartNoggin, Angel Dear, Counter Culture Coffee, Sassy Baby, Steven Smith Teamaker, support and feedback from Doernbecher staff, and her own human-centered design background for getting the program started so quickly, and for making the experience of applying for a box super easy.

“We’re used to looking at things and asking how they can be better,” she said. “We love to work directly with our hospital friends and our families to get feedback on our programs and donations. We learn early and often to ensure we’re providing the best support possible.”

“A lot of times, it’s really small things that make the biggest difference,” she said.

Kat plans to scale up at Foxbox to make even more of a difference by working with more families at OHSU Doernbecher, and by expanding to other hospitals. Foxbox plans to work with the Doernbecher NICU later this year to develop a NICU-specific program. 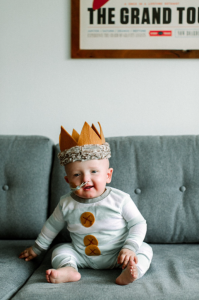 But ultimately, she’s still focused on what she calls “tiny big moments.”

“These moments are so tiny that if you blinked, you’d miss them,” she said. “But the tiny moments are how you survive and what helps carry the weight of grief once the wave has crashed. Our strength and our hope were built in practically immeasurable increments.”

Making tiny big moments possible are at the heart of what Foxbox does.

“We wanted to honor Cypress’ life in a way that would make him proud and happy, and spoke to his deep love for others,” Kat said. “That would have brought him a lot of joy.”