Kingston was born with a congenital heart defect (CHD) called hypoplastic left heart syndrome (HLHS). Today, he’s almost 6 years old and is coming up on the one-year anniversary of a heart transplant. We sat down with Kingston’s mom, Lizzie, to learn more about their story.

Can you share more about Kingston’s HLHS diagnosis and treatment?

I was 20 weeks pregnant with Kingston at my anatomy scan ultrasound when they found something wrong with his heart. We saw some maternal-fetal medicine specialists to officially diagnose him. In hindsight, receiving this news while he was in utero was good and bad. I didn’t get to really enjoy the rest of my pregnancy without worrying, but we were able to prepare for everything.

The rest of the pregnancy went smoothly. He had his Norwood heart procedure (the first of three open-heart surgeries for kids with HLHS) when he was six days old, and he was discharged two weeks after that. He was cruising right along with recovery, but then he and I got the sniffles when he was about four months old. It almost killed him. He had to go in for an emergency catheterization, where we discovered that his BT shunt was narrowed. They placed a stent and he went into complete shock because his body wasn’t used to that much blood flow. He was in complete organ failure.

The team rushed him to have his second surgery, the Glenn procedure, and he wasn’t recovering properly so he was life-flighted to California for a transplant evaluation, which was denied.

One thing you should know about Kingston is that he goes big or goes home. He pulled out of this crisis, as Kingston usually does. This was far from the last time something like this has happened – it’s the Kingston way.

The next two years he coasted and things were going well. He had his third surgery, the Fontan procedure, when he was 3 years old and his recovery was fairly smooth, though we did have one short readmission. He did great for another year, but then he got really sick in 2020. We made it back to Doernbecher and they ended up admitting him. 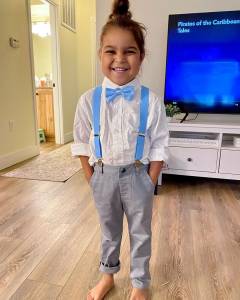 We finally got him added to the transplant list in California in 2020. At a clinical appointment in January 2021, they told us he wouldn’t be going home until he received the transplant. He was admitted and what happened next was the fastest three weeks of our lives. We expected to wait around a year for him to receive the transplant and had made plans for the meantime, including placing a single ventricular assist device (SVAD). Three days after that was placed, we got the call: a perfect match was available for Kingston.

In a perfect storm of events – literally – terrible winter weather delayed the transplant by a few days. At one point we thought he’d get the heart on Valentine’s Day – which was so funny because we had been using this hashtag, #TheHeartOfKings, and it was just so fitting. He wound up receiving the heart on February 15, so we are coming up on one year post transplant!

It’s been a whirlwind of emotions, including feeling really sad for the donor family. We are so grateful for their gift.

How is Kingston doing since he received his new heart?

Remember what I said about Kingston being very dramatic? He went into severe rejection right after the transplant. He had a pulse dose of steroids for a weekend and then did another biopsy and there was zero rejection. We went home on May 15, 2021, and we’ve been home ever since. 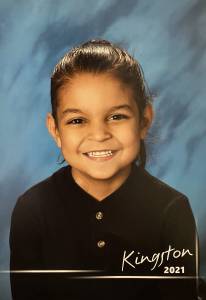 He has been immaculate. It’s complete night and day with him. This last year has been pretty “normal,” I guess – as normal as things can be during a pandemic. He still has CHD and that’s still him, but he just started kindergarten and is about to start either taekwondo or karate – he’s still deciding. He wants to play baseball and he loves running around outside. He’s always pushed the limits, but he needs fewer breaks now.

Being a transplant mom is hard. He’s still tired and his body is still trying to get used to this fully functioning ticker that’s working the way that it’s supposed to, but his body wasn’t used to it. He’s always had crazy amounts of energy and that’s tripled since the transplant!

Kingston’s latest biopsy showed signs of rejection, but they’re mild so we’re waiting to see what wheels we’ll be spinning there. With transplant you just never know, so we’re taking it day by day.

Advocate like hell. A lot of people at Doernbecher know me and know how I work with Kingston, so they always ask how I’m feeling and for my opinion. Parents know their kids best, and they should be involved in care meetings and connect with social work. I think parents can be in such a whirlwind in the moment and don’t really know what to expect – why would they? Kingston’s care teams have been great, but they don’t know your kid like you know your kid. If you feel like something is off, don’t feel scared to tell them you disagree.

One response to “The heart of kings: Kingston’s Doernbecher story”