Ezra and his mom, Andra, have been “frequent flyers” at Doernbecher since 2019, when Ezra was diagnosed in utero with a congenital heart defect (CHD) called hypoplastic left heart syndrome (HLHS). When he was two weeks old, he was diagnosed with a rare genetic syndrome called Cornelia de Lange Syndrome (CdLS). We sat down with Andra to learn more about their family’s Doernbecher story.

Can you walk us through Ezra’s diagnoses and treatment?

Ezra has shown all of us what being a heart warrior really means. When he was diagnosed with HLHS at his 20-week anatomy scan, there was a period of uncertainty in which we thought he could have double outlet right ventricle (DORV). He also tested negative for two chromosomal abnormalities – trisomy 13 and trisomy 18 – in an amniocentesis.

Ezra has been seen by his cardiologist, Dr. Robin Shaughnessy, since before he was born and he absolutely adores her to this day. She’s the one who confirmed his cardiac defect when I was 23 weeks along. She was very informative while being kind and reassuring. She never pressured me to terminate pregnancy and she never made me feel like Ezra’s life wouldn’t be worth something.Ezra was born at 36 weeks. He weighed 3 pounds, 8 ounces, which is pretty typical for a child with a CdLS diagnosis. Most kids with CdLS have a very small stature and they have their very own growth chart for weight and height. CdLS affects an estimated 1 in 30,000 live births, and we were so lucky to be diagnosed as quickly as we were. It can range from mild to severe and Ezra lies somewhere between moderate and severe. His specific mutation is on his NIBPL gene. CdLS can cause cardiovascular defects, severe gastroesophageal reflux disease (GERD), limb differences, vision and hearing impairment, global delay and eating difficulties – along with other vital organ anomalies. 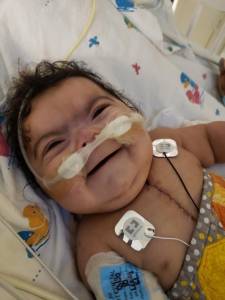 Ezra is 2 years old now, and he’s been through a lot. He had an open-heart surgery called the Glenn procedure when he was 6 months old. We had a bumpy recovery, but when Dr. Shaughnessy popped her head in for rounds before returning to clinic, it always put me at ease.

He was admitted for dangerously low oxygen levels in December of 2020 because of severe collateral vessels blocking his oxygen supply. Dr. Laurie Armsby performed his cardiac catheterization procedure on December 23 – it was a 10-hour procedure. On Christmas Day, Ezra was on maximum support and was not improving. Things weren’t looking good. Dr. Armsby, Dr. Ben Orwoll and Dr. Mohammad Alnoor all worked together and somehow saved Ezra. It was nothing short of a miracle that they managed to pull him through. He was finally discharged on January 15, 2021.

It’s been an intense journey full of ups and down, but Ezra beat the odds while smiling the whole way through. A lot of that is because of our care teams, especially those in pediatric cardiology and the pediatric ICU. They hold a special place in my heart. We love Doernbecher!

What have you learned along the way that might help other families?

For other parents or caregivers stepping into any genetic diagnosis, it’s so important to dismantle the ableism you hold within yourself. We are all products of our society, so this will take work. No matter the child’s diagnosis, a disability does not make them less worthy or than any other child.

For other heart parents, my advice is to breathe. CHD is a fierce battle and the first year is the hardest. Advocate your wishes to your team, gather resources with help from social workers and ask questions. And when you’re able to do so, hold your baby – don’t be scared of any tubes or wiring. Our nurses and respiratory therapists are great at helping so you can get this bonding time with your child.

For all parents or caregivers facing a diagnosis of any kind – try your hardest not to Google it! Instead, find support groups on social media (e.g., Facebook, Instagram). Google search results will always look so gloomy and discouraging, but in online communities, you’ll see so much love, kindness and support, along with transparency.