Seven-month-old Oliver was born with cleft lip, a craniofacial disorder that occurs when the tissues that form a baby’s mouth and lips do not align. He had his repair surgery nearly two months ago. We sat down with Oliver’s mom, Jessica, to learn more about their cleft journey.

Can you walk us through Oliver’s cleft lip diagnosis and surgery? 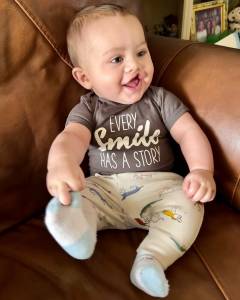 We found out at our 20-week scan that Oliver had a cleft. At the time, our care team couldn’t tell for sure if he had a complete cleft, if it was on one side (unilateral) or both sides (bilateral), or if his palate was also affected.

We live in Klamath Falls and I had to travel to Medford for monthly scans after that. We also had two telemedicine visits with the team who would eventually repair his cleft lip at OHSU Doernbecher.

After Oliver was born in December, we were able to confirm that he just had the cleft lip – an incomplete cleft on the left side of his nose. His palate wasn’t involved, which was a relief, and he didn’t have any other health problems.

When Oliver was 3 weeks old, we came up to Portland for our first in-person visit with his Doernbecher care team, which included his surgeon, Dr. Erik Wolfswinkel. A few months later, at Oliver’s pre-op appointment, Dr. Wolfwinkel told us he thought Oliver might have what’s called a mini-microform cleft on the right side. 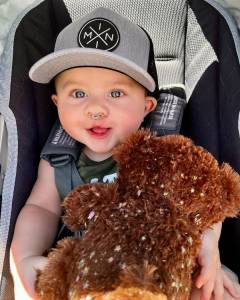 Oliver was in surgery for about two and a half hours. He had a complete left lip fix and a nice little nose job. We were able to go home that same day.

We’re looking forward to getting Oliver’s nose stents removed soon, and will continue to meet with his Doernbecher team to see if he needs any additional surgeries before he starts school. He’ll need to be followed by his care team until he’s 18 and there are some other possible implications – for example, he’ll likely need braces.

Overall, we are very relieved to be on this side of his surgery and are so amazed by how our handsome boy looks with his new forever smile!

I remember when I found out my baby would have a cleft lip, I just lost it. I cried so hard and my husband asked, “Why are you crying? It’s going to be fine.” He was right.

Getting any sort of unexpected medical diagnosis for your child is obviously scary. None of us want anything bad to happen to our children. You just have to take it day by day. It’s very overwhelming at first, but there are so many people who care about these kids and know what they’re doing. Trusting that our doctors know what’s best for our kids was also something that brought me comfort.

Oliver is our second child, but a lot of things – like feeding – are so different with a cleft baby. It almost felt like being a new parent! We found a lot of support from the cleft community – I follow some cleft parent accounts on Instagram and joined a Facebook group, both of which have been incredible resources. I can ask questions and people immediately chime in to offer advice or simply reassure me that what we are experiencing is normal.

One response to “A forever smile: Oliver’s Doernbecher story”