Matt Pozsgai celebrated his 28th birthday by running from his home in Salmon Creek, Washington, to the front doors of OHSU Doernbecher Children’s Hospital. Each step of the 27-mile trek was filled with meaning, and as he headed up Campus Drive, the streets were lined with the very people who helped save his life. Among them was OHSU Doernbecher nurse Jessica Dizon-Rosales, who joined Matt for the final stretch to the finish line.

Completing a marathon is a huge accomplishment for anyone. For Matt, it’s one he couldn’t have imagined attempting for the first 25 years of his life.

When Matt was 4 months old, he was diagnosed with a disease called cystic fibrosis, or CF for short. CF is a genetic, progressive disease that mainly affects the lungs and digestive system, and kids with the disease are prone to lung infections and other complications. 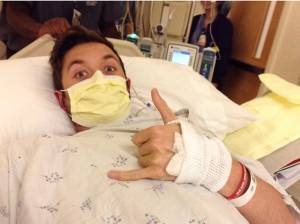 “I was a Doernbecher patient my whole life – I received care there until I was 22, and I think I had about 35 hospital admissions there,” Matt said.

He eventually transitioned into adult care at OHSU and in Vancouver, Washington, but the relationships he formed at Doernbecher continue to this day. One that stands out is his friendship with Jessica, who was one of his primary nurses during his many stays on 9North (Doernbecher’s Acute Care Unit).

“Doernbecher became like a home to my family and me, and the people there became family,” Matt said. “I’ve known Jessica since I was 14, and she’s seen me through the sickest point in my life.” 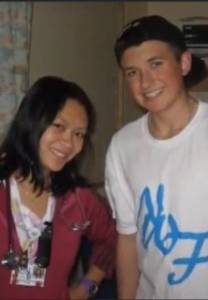 Patients with CF are among the most frequently admitted on 9North, so care team members become very familiar with disease processes and families.

“Matt was in the hospital every two months for pretty much his whole childhood,” Jessica said. “I literally watched him grow up from a child to a teenager to adult.”

When they weren’t having conversations about things like pulmonary function tests, Jessica and Matt bonded over the Trail Blazers and movies. She remembers helping him with his homework and spending time with his siblings, too.

“As a nurse, when I think about the patients who have really touched my life personally and professionally, Matt is one that sticks out,” Jessica said. “We developed a pretty close relationship as patient and nurse – I know the other nurses who took care of him would say the same.” 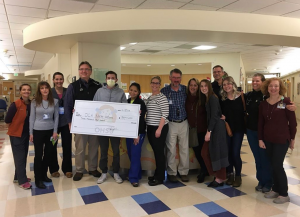 After transitioning from pediatric care, Matt kept in touch with his Doernbecher team, often bumping into them at events for the CF community, like the Cystic Fibrosis Foundation’s annual walk. Matt even threw a fundraiser for Doernbecher for his 25th birthday, raising an incredible $3,400 donation for the hospital that’s so close to his heart.

Shortly after that, something happened that changed the course of Matt’s life: He started a new drug called Trikafta.

Trikafta is a life-saving treatment for many people with CF, but it only works for patients with specific gene mutations. It received FDA approval in October 2019, and Matt started his first dose of treatment the day after Christmas.

“I was hopeful but guarded,” Matt said. “Right before starting Trikafta, I was barely hanging on to half of my lung function and my disease process was starting to trend toward needing a lung transplant.””

Within hours of his first dose, Matt started to notice positive changes. He experienced what’s known as a “purge” in the CF community – everything that had been stuck in his lungs came flooding out.

“My health started skyrocketing, and my lung function improved pretty quickly,” Matt said. “Because CF affects the digestive system, too, gaining weight had always been one of my biggest battles but I was able to gain about 30 pounds after starting Trikafta.”

“When I was sick and spending lots of time in the hospital, I had all of these goals that seemed impossible,” Matt said. “I wanted to do crazy things – sitting around a hospital makes you want to do stuff like that.”

After starting Trikafta, Matt began pursuing his goals, many of them fitness related.

“When I was sick, I couldn’t run a lap around a track without being completely winded,” Matt said. “The fact that I could run made me want to.”

So he started running.

And then, the COVID-19 pandemic hit.

Jessica had been keeping up with Matt’s progress, but she knew COVID-19 threw a wrench in everyone’s lives and plans. She reached out to check in on Matt and, earlier this year, planted a seed in his head: What if they ran a race together?

A runner herself, Jessica found the sport to be helpful in managing the stressors of working in healthcare during a pandemic.

“I was in the trenches and running was my way to cope with the uncertainty of the world,” she said. “I told Matt I would join him at his first race, thinking it would be a 5K or something.”

But then, she aimed a little higher.

“Matt is literally just taking the world by storm, and he’s done the impossible already,” Jessica said. “I thought, wouldn’t it be cool if we could check off one of world’s biggest marathons together?”

The marathon series she was talking about is the Abbott World Marathon Majors, which take place in Berlin, Boston, Chicago, London, New York City and Tokyo. Participants must have a qualifying time from another course, but they can also apply to run as part of a charity team.

This spring, Jessica and Matt were accepted to run on behalf of the Cystic Fibrosis Foundation at the Chicago Marathon.

As the marathon approached, they looked forward to the moment when they would cross the finish line together, celebrating how much Matt has been able to overcome because of Trikafta – but also because of his grit, his perseverance and his refusal to stop dreaming.

Then, the morning of the marathon, Matt tested positive for COVID-19.

“I was absolutely crushed,” Matt said. “I’m normally an ‘everything happens for a reason’ kind of guy, but I was really struggling to maintain that mindset once I realized I wouldn’t be able to run the marathon that day.”

Jessica completed the marathon on her own, which broke her heart.

“I wanted that moment to belong to Matt,” she said. “I was super proud of my accomplishment but I broke down in tears because my running buddy couldn’t be there.”

Matt wasn’t sure what his next move would be. After he was recovered and back home, he went for a run and felt so good that he wound up doing a half marathon.

“At that point, I didn’t want to wait any longer – I’d put so much work into training,” he said. “The thought came to me that I should just run my own marathon; I wanted it to still have some significance, so I planned to have the finish line at Doernbecher.” 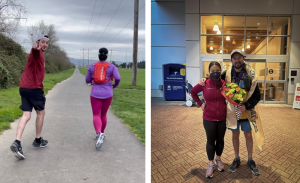 Matt planned out his route: Along the Salmon Creek Trail, through downtown Vancouver, across the I-5 Bridge, through Delta Park, down North Vancouver Avenue and the Eastbank Esplanade, across Tilikum Crossing and finally (finally!) up Marquam Hill to Doernbecher. He logged 27 miles – just a smidge over the 26.2 marathon distance – and was cheered on by current and previous members of his care team, family, friends and other members of the CF community.

“I knew there were going to be people there, but there were way more than I expected to show up, which was really cool,” he said. “Doernbecher was my second home so it was such a full-circle moment for me.”

So what’s next on Matt’s list? He wants to be the first person with CF to complete all six Abbott World Marathon Majors. He just found out that he can run in Chicago in 2023 and he and Jessica are going to try for another marathon together, likely the New York City Marathon. He’s a volunteer firefighter at the Camas-Washougal Fire Department. He wants to summit Mt. Rainier and then, someday, Denali. He wants to do an Ironman and has a couple of ultramarathons planned.

It’s quite the list. But on top of all of those accomplishments, Matt feels a calling to positively impact people.

“I feel this sense of purpose to document my journey with all of this in hopes of setting a positive example for other kids with CF and chronic illnesses. I want to show not only what’s possible, but that you have a purpose in life regardless of what your diagnosis may be,” he said. “I want to show people that you don’t just have to be ‘the sick kid.’ If I can inspire one person to go out and chase what they want most in life, then I’ll be happy.”