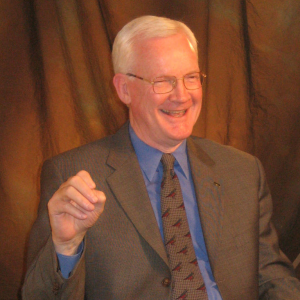 Another interview from our Oral History Collection is now available online. The subject of this interview is an instantly recognizable figure at OHSU, Dr. Peter O. Kohler. He’s the namesake for the Kohler Pavilion on campus and he dedicated almost two decades to serving OHSU as president from 1988 to 2006. This newly digitized interview, conducted in 1998 during his tenth year as president, follows Kohler as he explores how OHSU transformed over the course of ten years and considers its future. However, some of the most interesting aspects of the interview are Kohler’s own anecdotes, which highlight his personal experiences and provide insight into one of OHSU’s most prominent figures.

An intriguing example of this is Kohler’s revelation that he almost didn’t become president. Despite memorably accepting the position on St. Patrick’s Day, a small detail in the “Memorandum of Understanding” between Kohler and the Oregon Board of Education reveals that Kohler had “reconsidered” his previous decision. When asked to elaborate, he explained that he had asked to be removed from the pool of candidates as he was “disenchanted” by the early process. However, his interest in OHSU and its “tremendous opportunity for growth” remained. Eventually members of the search committee persuaded him to reconsider his decision and the rest is history!

Related interviews: Susan Tolle and Miles J. Edwards both discuss the Center for Ethics; Kohler was also interviewed in 2006.Later on, he explores his early life and how these experiences shaped his path. We learn that his father was an English professor who moonlighted as a soap opera writer during summers and as a result, Kohler split his time between Virginia and New York. This led him to study at the University of Virginia, where he majored in English, despite his father’s discouragement. And it’s hard to believe, but he wasn’t always set on pursuing medicine. After completing his undergraduate degree in English, he enrolled in law school before settling into medicine. Despite this untraditional start, he views his background in the liberal arts as a positive, citing it as influencing his subsequent career and work as president, contributing to his interest in ethics and the ultimate creation of the Center for Ethics at OHSU.

Dr. Kohler’s interview encompasses a wide-range of topics, but ultimately is more than just an exploration of his accomplishments as president. Intertwined with milestones and the overall development of OHSU as an academic health center are valuable personal insights, ruminations, and perspectives which serve to humanize and help us understand such an influential figure in OHSU’s history.

Know of someone that should be interviewed? Let us know!