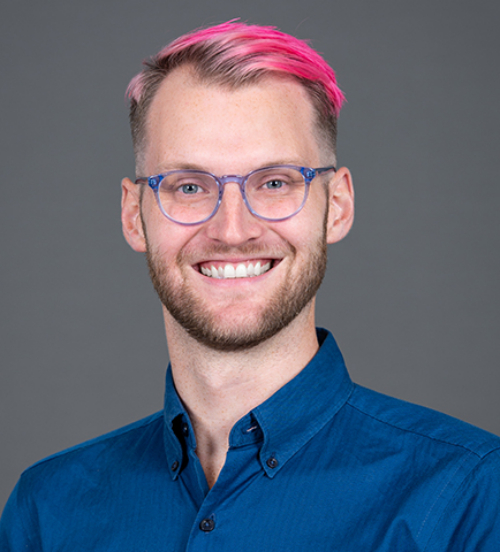 The most recent addition to OHSU’s Oral History Program features Dr. Blair Peters (he/they), plastic and reconstructive surgeon and Assistant Professor of surgery, as he discusses recent developments in gender-affirming medical practices, the importance of representation in medicine, and his ongoing work to help make OHSU a safer space for LGBTQ+-identifying patients and faculty. This interview was conducted by Dr. Geolani Dy.

Peters begins the interview by briefly recounting their earliest days in medical school, citing that their love of plastic surgery helped to steer them towards plastic and reconstructive surgery as a discipline. As Peters progressed through medical school, they also explored and openly embraced their queerness, citing this as a catalyst for pursuing a career in gender-affirming medical practice.

After Peters found himself in the world of reconstruction, however, he realized very quickly that he could not readily identify the needs of the community he wanted to serve because of the historical disconnect and trauma that exists between the medical field and the LGBTQ+ community. In the context of gender-affirming surgery, Peters noted that patients who came to see him years after an operation would often express joy over the general quality-of-life improvements they experienced since their procedures. However, they would also often simultaneously express dissatisfaction with the lack of discussion around the neurological implications of gender-affirming surgery in pre- and post-op consultation.

This motivated Peters to try and find ways to make things better for their patients. They began sitting down and talking with their patients about individual experiences and perspectives, which eventually helped them to develop and adopt specialized and patient-informed surgical techniques and procedures for the neurological and sensory components of these surgeries. As Peters began to undertake this work, they recognized it as an opportunity to improve the provision of medical care to all by asking questions and earnestly listening to the needs of a community who have historically been overlooked or dismissed by doctors.

I think it’s sort of reflective of why you need diversity in a field. Different perspectives are only going to push things forward, and I think that’s something that I’ve been happy to be able to offer up front.

Peters’ own queer identity has played a huge role in his advocacy work and medical practice, allowing him to converse with patients and comfort them in a way that affirms the power of person-to-person connection. This, he feels, helps his patients to trust him and to be honest with him. Sporting a head of bright pink hair during the interview, the presentation of his outspoken, most authentic self in academic and clinical settings has previously put him at odds with those who champion unconditional “professionalism” in medicine and academia.

Peters’ wrote Professionalism is a Trojan Horse in June 2021, a response and “wake-up call” to their experiences in medical school and residency of being told to look, speak, or act a certain way for the sake of professionalism and “for their patients.” The post takes a candid dive into what professionalism really means for those who do not fit the dominant sociocultural definition of “professional.” During this oral history interview, Peters echoes the frustrations they experienced when asking their colleagues if dyeing their hair pink after accepting a faculty position was a good idea or not.

There was this whole idea that you had to just either hide or lose your identity in order to be in this space. And for a field that is literally about humanizing and centering people, it was quite bizarre to me that as a practitioner of that field, you’re supposed to de-center and de-humanize yourself.

Peters himself defines professionalism as “showing up to work as your authentic self, and taking pride in what you do,” and hopes he can make a meaningful impact in changing how the School of Medicine discusses and promotes the concept of “professionalism.” Coupled with his genuine excitement at being at the forefront of gender-affirming surgical care this early on in his practice, he hopes that these important, barrier-breaking conversations are only just beginning.

“I think people are honestly ready for change,” Peters says with a smile near the end of the interview.

Other topics of discussion in this interview are the gaps in current medical education around serving LGBTQ+ patients, differences between the Canadian and American healthcare systems, having a social media presence as an academic and as a doctor, the importance of mentorship, and the future of gender-affirming medical care.

Know of someone that should be interviewed? Let us know!