The third phase of the North Campus Utility Plant project behind Richard Jones Hall, which began in early November, hit a significant milestone 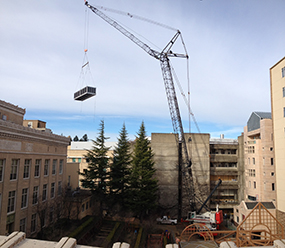 earlier this month. The crane, which was positioned in the research courtyard to lift materials and equipment for the cooling tower replacement project on the backside of RJH and the Vollum Institute, has been dismantled.

The project will be ongoing through the end of April, but the contractors’ presence will be primarily behind Richard Jones Hall, for the installation of the cooling towers. The towers are beyond their useful life; their replacement will result in better cooling for RJH as well as more reliable power. 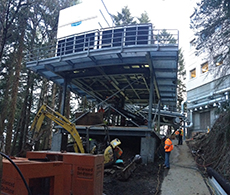 The construction team would like to thank the researchers on the 7th floor of RJH for their cooperation in the evacuation process while the crane crew flew the heaviest items over the building to the jobsite. The construction team would also like to thank the animal holding folks for their cooperation and patience during the crane operations and tunnel shoring.

The crane team made more than 200 lifts over the building in the last two months with no safety incidents or unplanned impacts to the building occupants. Overall, more than 10,000 crew member hours have been dedicated to this project thus far. 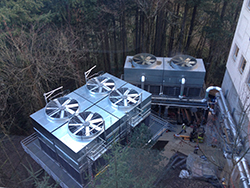 The construction team is pleased to reach this milestone and move one step closer to a very successful project thanks to the patience and cooperation of everyone involved.