Vinay Prasad, M.D., M.P.H., is a hematologist-oncologist and assistant professor in the OHSU School of Medicine. He is nationally known for his research on health policy, evidence-based medicine, bias, and medical reversal. Clinically, Dr. Prasad specializes in the care of lymphoma patients. He holds appointments in the Department of Public Health and Preventive Medicine and the Center for Health Care Ethics, where he is a Senior Scholar. We sat down with Dr. Prasad to talk about the formation of his career, his current projects, and where he sees his work going.

I’m a Midwesterner from the Chicago area, and I didn’t stray far from home when I started college — I went to Michigan State University and then the University of Chicago. At MSU, I studied philosophy, writing, and science from several terrific professors, who pushed us really hard to think about our assumptions, and question them. That was a good foundation for my experience at the University of Chicago as a medical student, which was a really special place for people who were thinking critically about medicine. I completed my training at Northwestern University — where I had still more excellent role models in evidence-based medicine — and my hematology-oncology training at the National Institutes of Health, which, for me, was the ideal place to train.

When we think of medicine, we think of science, of proof. But it wasn’t until the 70s, 80s, and 90s, that we really developed a field of medicine that prioritized evidence. Before this time, evidence was used here and there, but the bulk of what you learned as a doctor was based on some very senior person telling you that’s how things were done. It comes as a shock to people outside of medicine that all medicine wasn’t always based on evidence, and, to some degree, still is not.

What knowledge do you want to see medical students graduate with? 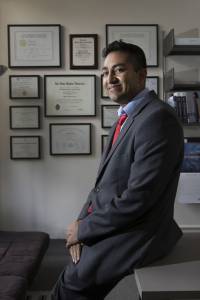 First, you want doctors to be conscious of bedside manner. In 2016, it is of paramount importance to be good at that, and I think our training is getting much better at teaching the right skills.

Second, medical students definitely should graduate knowing how to think critically, evaluate a paper, and how to interpret statistics. The more you practice medicine, it becomes less about memorization and more about critical thinking. I think maybe we should move away from thinking medical students should graduate with a few research abstracts on their CV, which often rely on very unreliable methods—because that is what can get done in the time allotted. Instead, I think we have to teach the appraisal of medical evidence much more formally—much greater emphasis on study design, reliability, and how to make inferences from data. We have to teach students that medicine is a field where you will always be learning.

The prerequisites for medical school are tangential to medical school — calculus, physics, and organic chemistry — not to say there are no doctors that use those, but most don’t. There are better ways to teach memorization and critical thinking. Philosophy is arguably something that trains you to think very critically; logic trains you to think critically; statistics too. I would consider those things. But again I would experiment, rather than mandate.

What research are you conducting now?

Well, we have a lot of projects underway. A lot of what we’re doing is at the intersection of policy and funding and we’re doing a lot of work on is how we should pay for medical practices. If you’re in oncology, the cost of drugs is something that you cannot avoid. And we’re doing a little bit of work on in conflict of interest, prioritizing randomized-controlled trials, and some about research funding.

My goal is to try to do work that’s impactful. I aspire to do work that is read and hopefully leads people to change. I think a lot about what I want the work to be.

Studying FDA drug approval is a big part of what we’re doing. Because, while there are a few drugs that are wonderful, a lot of the drugs the FDA approves are very marginal. So we’re doing a lot of work to ask should those drugs be approved, how should they be studied if they are approved, and under what circumstances should they be pulled off the market.

We have a new paper in JAMA Oncology where we start with what I think is an uncontroversial premise — that the purpose of the FDA is to approve drugs that improve survival or quality of life for people in America. That’s their purpose.

A simple fact is that the majority of drugs approved in cancer over the last 10 years are marginal. The median improvement in survival is about two months. Our conclusion is that it’s time to treat overall survival — what has always been a gold standard endpoint. So maybe we should actually have post-marketing commitments and grant only provision approval.

What do you do when you’re not at work?

I like being here at OHSU. I’ve been really impressed with my colleagues — across campus there are so many things going on. People at OHSU are working on clever projects. I think the funding for research here allows scientists to treat research as research.

I find a lot of people very like-minded on the topics I research. People across OHSU. And there are several senior people here who are tremendously supportive.

As for the city of Portland, I love it. I like to ride my bicycle and go on hikes. And to restaurants and the bookstore. But really? I love to binge watch television and movies. Now, Game of Thrones. And, for all time, my favorite show was the Wire.