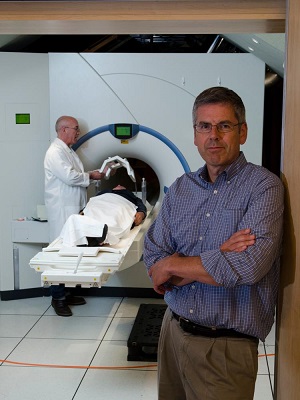 In the coming year, patent-pending imaging software developed by OHSU scientists will be used to validate, for the first time in humans, a new imaging approach to map brain metabolism at high spatial resolution and determine if metabolic deficits are common in individuals with progressive multiple sclerosis. Part of what makes translation of this study to the human brain possible is the new software, which was developed by a team led by Bill Rooney, Ph.D., professor and director at the OHSU Advanced Imaging Research Center. Rooney, together with colleagues Rebecca Spain, M.D., assistant professor of neurology, and Manoj Sammi, Ph.D., assistant professor within the Advanced Imaging Research Center, are advancing this approach with funding provided by the Conrad N. Hilton Foundation.

This approach will also be applied to investigate a newly discovered physiology, the glymphatic system, that clears out toxins in the brain, including those that form Alzheimer’s plaques. Until now, the glymphatic system has only been studied in small animals, and the application of less invasive methods will support human studies. A $1.4 million Allen Distinguished Investigator award from the Paul G. Allen Family Foundation is funding this next step in the Alzheimer’s research being conducted by OHSU scientists. Jeff Iliff, Ph.D., assistant professor in the Department of Anesthesiology and Perioperative Medicine, and Rooney are co-leaders of the study.

For Rooney, the potential discoveries of the upcoming study, and the imaging software that makes the study possible, become most meaningful when they are developed so they can improve patient care.

“Researchers are great at discovery, but the other aspects of developing these ideas into tools and drugs and devices that advance human health—that’s where things can fall apart,” Rooney said. “Discoveries are often not taken past this point. Having ideas and novel concepts is wonderful, but if they don’t really rise to the level where they’re advancing human health, that’s a real shame. But there is considerable strength collectively in the Pacific Northwest that should be tapped to advance neuroscience and technology.”

Toward building that collective in the Northwest, Rooney is playing an important role as the university and industry work to build an ecosystem that actively moves research from the laboratory into practical use. His contributions to creating a Northwest hub for neurotechnology include participating in the Northwest NeuroNeighborhood and the launch of the NeuroFutures annual conference, which will be held at the University of British Columbia, Vancouver, British Columbia, this July 2017. These initiatives are building collaborations that draw on the strengths of all actors.

In the Advanced Imaging Research Center, Rooney works with scientists Charles Springer, Ph.D., and Xin Li, Ph.D., to develop an improved model for analyzing data using dynamic contrast-enhanced magnetic resonance imaging. The Shutter Speed Paradigm is able to map the metabolic activity of cancer cells within a single tumor and the cells’ focal response to breast cancer therapy—something no other technique can do. The technology, MRI Biomarker for Cancer Identification, was commercialized in 2012, licensed by Imbio, Inc, and supported by an NIH Small Business Innovation Research grant.

Drawing on the Shutter-Speed Paradigm, Rooney and his team developed the software being used in the upcoming study, High Spatial Resolution Brain Metabolic Imaging software, which has the ability to map cerebral metabolic activity at high spatial resolution. This could improve diagnosis and therapy monitoring of neurological disorders, from Alzheimer’s and other senile dementias to multiple sclerosis and brain tumors.

When novel ideas have the potential to improve patient care as technologies or therapies, OHSU Technology Transfer and Business Development provides expertise and resources to steward innovations from the laboratory to clinical application through the process of commercialization. The team provided support for the commercialization of the MRI Biomarker for Cancer Identification and worked with Rooney to file the patent for the new imaging software. The office provides expertise, connects scientists with investors, identifies new collaborative partners, and processes material transfer agreements. Bringing research findings to patients requires the time, resources, and expertise of more than a single individual.

The combined intellectual, technological, and financial resources of universities, industry partners, and government collaborators working with scientists, engineers, neurologists, radiologists, and neurosurgeons is creating an ecosystem that could put Portland and the Pacific Northwest at the forefront of neurotechnology—and tackle some of the world’s most devastating diseases.