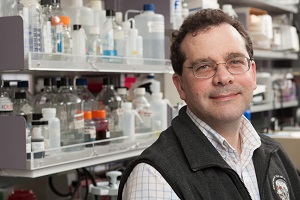 The March issue of Nature Biotechnology brings together a set of articles that provide an overview of promising RNA-based therapies and the challenges of clinical validation and commercialization. In his News and Views essay, “Hearing in the mouse of Usher,” John V. Brigande, Ph.D., provides commentary on two studies in the issue that report important progress in research on gene therapy for the inner ear.
One in eight people in the United States aged 12 years or older has hearing loss in both ears. That figure suggests that, if you don’t have hearing loss, you likely know someone who does. Worldwide, hearing loss profoundly interferes with life tasks like learning and interpersonal communication for an estimated 32 million children and 328 million adults worldwide. Inherited genetic mutations cause about 50 percent of these cases.
The challenge in developing gene therapy for the inner ear isn’t a lack of known genes associated with hearing loss, but a lack of vectors to deliver DNA into cells. Brigande, associate professor of otolaryngology and cell, developmental, and cancer biology at the OHSU School of Medicine, provides perspective on companion studies that demonstrate adeno-associated viral vectors as a potent gene transfer agent for cochlear cell targets.
The first study demonstrates safe and efficient gene transfer to hair cells of the mouse inner ear using a synthetic adeno-associated viral vector that promises to be a powerful starting point for developing appropriate vectors for use in the human inner ear. The second study demonstrates that a single neonatal treatment with this viral vector successfully delivers a healthy gene to the inner ear to achieve unprecedented recovery of hearing and balance in a mouse model of a disease called Usher syndrome. Individuals with Usher syndrome type 1c are born deaf and with profound balance issues and experience vision loss by early adolescence. The research teams were led by scientists from the Harvard School of Medicine.
Brigande sees these new studies as potentially spurring investment and kickstarting the development of new approaches to correct a diverse set of deafness genes.
Note: Brigande teaches in OHSU’s ethics course, and let us know he is not responsible for the clever title of his News and Views article. Andy Marshall, chief editor at Nature Biotechnology and fan of Edgar Allen Poe, suggested the title over Brigande’s. So we want to make sure you know—it was Andy Marshall who came up with the creative title. Everything else is Brigande’s.

One response to “John Brigande provides commentary: Hearing in the mouse of Usher”