Treatment protocols for prostate cancer in the United States draw heavily from results of the largest-ever randomized controlled trial of treatments for the disease. In that trial, which was conducted in the United Kingdom, few than one percent of patients were of African descent, a number far smaller than the 13.8 percent of the U.S. population represented by African Americans according to the most recent U.S. Census.

Shearwood “Woody” McClelland III, M.D., was featured in the May 2018 OHSU In the Lab series. One of the topics covered was the relationship of health disparities to race, ethnicity, and class.

“Is it new? Will it help someone?” These are questions McClelland asks when he considers a research project. A clinical research assistant who works with Timur Mitin, M.D., Ph.D., McClelland’s research publications include several on health disparities. He also counts Jerry Jaboin, M.D., Ph.D., and Charles Thomas, M.D., among his mentors.

What are you researching, and why is it a big deal? 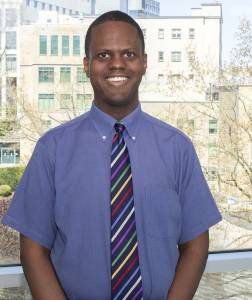 In radiation oncology, we now have accuracy to the level of one to two millimeters for treatment delivery. In many clinical situations, radiation is comparable and often preferable to surgical intervention. Why, I wondered, in the United States, in such a wealthy country, are there so many people with cancer who lack access to radiation oncology?

Through our Department Chair, Dr. Charles Thomas, I came to write a series of articles on health disparities for Advances in Radiation Oncology.

Appalachian-Americans are a largely forgotten population; although disparities in access to optimal medical care and outcomes are greater in the African-American population in terms of percentage, in terms of sheer numbers there are more poor people, many of whom are white, lacking access in Appalachia.

What is one of your most exciting moments in discovery?

I found that the most significant research trial on men with prostate cancer grossly underrepresented minorities. Everyone quotes the study, but realistically if you’re not white, does it apply?

The study, the Prostate Testing for Cancer and Treatment trial, or ProtecT, is one of the largest-ever randomized controlled trials of treatment for prostate cancer. It found that active surveillance is as effective as surgery or radiation therapy in terms of prostate cancer-specific survival at 10 years.

The authors omitted racial demographics when they published their findings in the New England Journal of Medicine. I had to search for earlier articles from the authors to find the demographics of their patient population; fewer than 1 percent of patients were of African descent, a number far smaller than the 13.6 percent within the U.S. population (based on the 2010 US Census).

We found 97 percent of patients were white, and the remaining 2 percent were labeled “other.” Obviously it would be difficult to extrapolate the findings of this UK trial to African-American, Asian-American and Hispanic-American patients.

We published our findings in “The Danger of Applying the ProtecT Trial to Minority Populations” in the March 2018 issue of JAMA Oncology.

My hope is that this publication, as well as the disparity series currently being published in Advances in Radiation Oncology, will lead to improvements in protocols and funding for more representative inclusion of nonwhite patients in landmark clinical trials, and improved access to radiation therapy for these populations.

What’s your day-to-day life as a researcher look like?

The remainder of my time is spent reviewing and discussing current literature with Drs. Mitin, Jaboin and Thomas. We focus on finding ethical and clinical shortcomings that we believe must be addressed in print, as well as inspirations for new clinical trial concepts.

About In the Lab

OHSU In the Lab looks at the people in the laboratories who help make OHSU such a vibrant research institution.