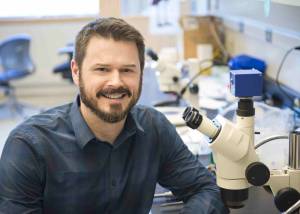 The degeneration of axons–the slender nerve fibers that allow neurons to transmit information–is a major factor in amyotrophic lateral sclerosis, or ALS. Researchers have long thought that if they could uncover how to preserve axons, diseases like ALS could be treated. Marc Freeman, Ph.D., Director and Senior Scientist at OHSU’s Vollum Institute, and and his colleague Michael Coleman, Ph.D., University of Cambridge, made the revolutionary discovery of two key regulators of axonal health and degeneration (NMNATs, SARM1)–work that has paved the way for drug discovery to block axonal degeneration in ALS and other diseases. This critical work is the basis for their receiving the inaugural Drs. Ayeez and Shelena Lalji & Family ALS Endowed Award for Innovative Healing, from the Sean M. Healey & AMG Center for ALS at Massachusetts General Hospital. The award is a new annual, global prize to recognize an individual or team of investigators for excellence in their transformative scientific discoveries focused on repair of neurological function in ALS. Read more about the prize here.